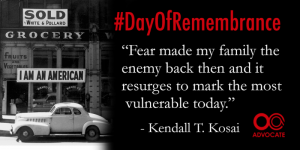 MINNEAPOLIS — Today is February 19, 2016, 74 years since President Franklin D. Roosevelt signed Executive Order 9066 (EO9066), requiring over 120,000 individuals of Japanese ancestry, most American citizens, to be incarcerated during World War II. Virtually overnight, they were asked to pack two suitcases and board a train to desolate incarceration camps. It was obvious that Japanese Americans were considered the enemy, because the guns were pointed inside the camps rather than outside.
My great-grandparents came to the United States from Japan in the early 20th century. They worked hard as farmers, looking to provide a better life for future generations and embrace the values that this country stands upon. I stand on the foundation of their sacrifices, which has given me so much opportunity today.
But during the war, my family lost their land, their possessions, and their way of life. Most importantly, they lost their freedom.
Today, it’s not difficult to see the parallels.
A few leading politicians have recalled this unjust past, speaking about  “securing our borders” by creating a registry of all Muslims, or banning refugees. They have built their
support on unfounded logic that penalizes thousands who are fleeing for safety to our shores. The great irony of these false claims is that many of the ancestors of the same politicians calling for an end to refugee resettlement arrived in this country for similar reasons.
What connects my family’s history to the difficult present of today is fear. It was fear that argued in favor of the incarceration 74 years ago and deprived the freedom of more than a hundred thousand Japanese Americans. That same fear is present today as our freedom and safety continue to be wrested from the most vulnerable for political gain. This fear can take many forms, including hate crimes against innocent Sikhs and Muslims or troubling patterns of false espionage accusations against Chinese American scientists. Fear is unfortunately alive and well in our country, as evidenced by a recent Public Policy Polling survey found that 60 percent of likely GOP voters in South Carolina supported a ban on all Muslims from entering the United States. Tellingly, 23 percent of these same voters still supported the Japanese American incarceration, even after these fears have been disproven time and again.
Fear made my family the enemy back then and it resurges to mark the most vulnerable today.
I think it’s easy to point fingers. It’s easy to think emotionally, not rationally. It’s easy to raise our voices to echo the loudest in a sea of desperation. And ultimately, it’s easy to succumb to fear, but we must remember that fighting for the rights of all is an arduous and ongoing journey. We look back on the Civil Liberties Act of 1988, which granted an official apology and reparations from Congress for incarceration, as a the legacy of a time when we surrendered to fear rather than overcame it. But as we recall these somber victories, we must also remember that we need to keep walking forward if we are to continue our fight for the most vulnerable.
I’m proud to stand with OCA and our other community partners that defend the civil rights of all Asian Pacific Americans. In such a unique political climate, I’m proud to be a part of an organization that fights for the values for which my great-grandparents came to this country.
Sincerely,
Kendall T. Kosai
OCA Associate Director of Development
2012 OCA National Civil Rights Fellow