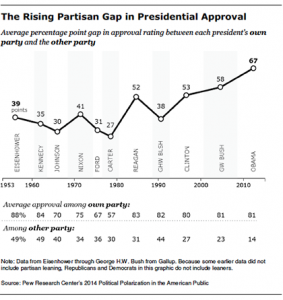 The United States is in the throes of two historic transformations at the same time. Our population is en route to becoming majority non-white at the same time a record share is going gray. These changes have created an America in which young and old don’t look, think or vote alike.

At the same time, Republicans and Democrats are more divided along ideological lines – and partisan antipathy is deeper and more extensive – than at any point in the last two decades. And the American public is deeply cynical about government, politics and the nation’s elected leaders.

In a new analysis, author Paul Taylor explores eight takeaways from the new paperback edition of The Next America. The 2016 edition of the book by Taylor and the Pew Research Center, released this week, includes a new introductory chapter on political polarization and the 2016 campaign, as well as a new appendix that explains how Pew Research Center conducts public opinion surveys at a time when new technologies and declining response rates have presented our profession with a mix of challenges and opportunities.

The Next America draws on the Center’s archive of public opinion surveys and demographic data to provide a portrait of where we are as a nation and where we’re headed – toward a future marked by the most striking social, racial, and economic shifts the country has seen in more than a century.