Skip to content
SAN FRANCISCO (Jan. 22, 2016) — In the cosmopolitan Islamic world of the 16th through 18th centuries, the exciting global exchange of people, ideas and technologies resulted in an atmosphere ripe for innovation. From Feb. 26 to 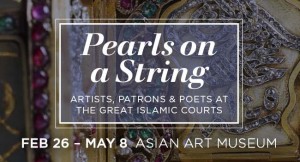 May 8, 2016, the Asian Art Museum of San Francisco will present Pearls on a String: Artists, Patrons, and Poets at the Great Islamic Courts, an exhibition telling the personal stories of three creative individuals who flourished within these stimulating societies. Through the written word, painted image and ingeniously engineered object, these men explored new ideas and perspectives — making a lasting impact on the legacies of their empires.

Pearls on a String is one of a trio of special exhibitions kicking off the museum’s 50th anniversary year. The exhibition, says museum director and CEO Jay Xu, embodies the goal that motivated the museum’s creation back in 1966 and still guides it today: to serve as a ‘bridge to understanding’ between East and West.

“The Asian Art Museum showcases art that emphasizes connections across time and place,” Xu says. “Pearls on a String does just that, taking us back to a time of tolerance, when Islamic rulers welcomed many religions in their courts, and diverse groups of intellectuals and artisans were encouraged to exchange ideas and work together.”

Through more than 60 exquisite artworks, including an eye-catching bejeweled rifle, the exhibition introduces three fascinating and influential figures: the 16th-century writer Abu’l Fazl in Fatehpur Sikri, the 17th-century painter Muhammad Zaman in Isfahan, and the 18th-century patron Sultan Mahmud I in Istanbul.

“By providing a rare glimpse of the worlds these figures inhabited, including the social connections that ignited their creativity, Pearls on a String highlights the importance of both individual initiative and human relationships in creating masterful works of art,” says exhibition curator Qamar Adamjee, associate curator of South Asian and Islamic art.

Pearls on a String is organized into three vignettes, each delving into the life of one of the individuals and the society in which he lived.

Section 1: The Writer | Abu’l Fazl at the Mughal Court

Entering the exhibition, you’ll first get to know writer and historian Abu’l Fazl ibn Mubarak (1551–1602). Abu’l Fazl witnessed and recorded events both intimate and momentous at the court of Emperor Akbar in 16th-century Mughal India (present-day Pakistan and India). Through Abu’l Fazl’s words, the legacy of this emperor’s influential reign has been preserved for posterity.

From the age of 23 until his death at 51, Abu’l Fazl served the emperor as advisor, chief secretary, ambassador, court historian, translator and trusted friend. His intellectual vigor, humanitarian values and liberal religious sentiments resonated with Akbar, whose court was a multicultural community that engaged with a variety of religious, artistic and intellectual traditions.

Section 2: The Painter | Muhammad Zaman at the Safavid Court

Zaman is recognized as the pioneer of farangi-sazi (European style), which combined Persian artistic traditions with European iconography and techniques. His hybrid style was used to reinterpret some of the greatest stories of Persian poetry, shining a new light on traditional lore.
As you’ll discover in Pearls on a String, this blending of European and Persian styles of painting was inspired by increasing diversity of the capital of Isfahan. During the 17th century, Western artists, adventurers and merchants poured in, mixing with the existing population primarily comprised of Persian and Central Asian Muslims, Georgians, Armenians, Circassians, Jews and Zoroastrians. The result was a multicultural society that gave Zaman his creative fuel.

Section 3: The Patron | Sultan Mahmud at the Ottoman Court

The final figure you’ll meet is Sultan Mahmud I (ruled 1730–54), who was celebrated in his day both as a sponsor of the arts and as a ruler who brought peace to the Ottoman Empire. Pearls on a String explores collaborations between Mahmud, his artisans and merchants, who developed a cosmopolitan court in Istanbul, the empire’s capital, poised at the crossroads of Asia and Europe.

Mahmud — a stout, hunchbacked man without experience in imperial affairs — had many challenges to overcome upon gaining the throne. As a boy in 1703, he witnessed his father’s humiliating removal from office by his uncle Ahmed III (ruled 1703–30). Then in 1730, a revolt broke out against Ahmed, and Mahmud was appointed ruler of a vast and unstable empire. Those who put him on the throne thought they could control him, but Mahmud proved them wrong. He was able to calm public unrest and initiate military reforms.

Using art and architectural patronage, Mahmud underscored his royal lineage and communicated his vision of a technologically advanced empire engaged with Europe. Mahmud was personally involved in commissions and appreciated cleverly engineered objects constructed of rare materials. One of the most remarkable pieces on display in Pearls on a String is a jeweled gun commissioned by Mahmud, which contains a curious assemblage of objects: a gold dagger, a pen case with writing instruments and other accessories, all lavishly encrusted in diamonds, rubies and emeralds.

EXHIBITION ORGANIZATION
Pearls on a String: Artists, Patrons, and Poets at the Great Islamic Courts is organized by the Walters Art Museum, Baltimore, in partnership with the Asian Art Museum. This exhibition has been made possible in part by a major grant from the National Endowment for the Humanities: Exploring the human endeavor; a grant from the Institute of Museum and Library Services; and an award from the National Endowment for the Arts. Presentation at the Asian Art Museum is made possible with the generous support of The Akiko Yamazaki and Jerry Yang Fund for Excellence in Exhibitions and Presentations, Anne and Timothy Kahn, and Judy Wilbur. This exhibition is supported by an indemnity from the Federal Council on the Art and the Humanities.

PUBLICATION
A catalogue accompanies Pearls on a String, published by The Walters Art Museum and University of Washington Press (hardcover, $60; 260 pages). Available at the Asian Art Museum store: 415.591.3600, [email protected] or store.asianart.org.

ABOUT THE ASIAN ART MUSEUM
The Asian Art Museum–Chong-Moon Lee Center for Asian Art and Culture is one of San Francisco’s premier arts institutions and home to a world-renowned collection of more than 18,000 Asian art treasures spanning 6,000 years of history. Through rich art experiences, centered on historic and contemporary artworks, the Asian Art Museum unlocks the past for visitors, bringing it to life while serving as a catalyst for new art, new creativity and new thinking.   Information: 415.581.3500 or www.asianart.org   Location: 200 Larkin Street, San Francisco, CA 94102   Hours: The museum is open Tuesdays through Sundays from 10 AM to 5 PM. Hours are extended on Thursdays until 9 PM starting Feb. 26 through Oct. 8. Closed Mondays, as well as New Year’s Day, Thanksgiving Day and Christmas Day.

General Admission: FREE for museum members, $15 for adults, $10 for seniors (65+), college students with ID, and youths (13–17). FREE for children under 12 and SFUSD students with ID. General admission on Thursdays after 5 PM is $5 for all visitors (except those under 12, SFUSD students, and museum members, who are always admitted FREE). General admission is FREE to all on Target First Free Sundays (the first Sunday of every month).