“It’s fantastic and really great,” a non-Asian member of the audience said, “it’s something difficult for you to go and see in America.”

The nonprofit performance aims at cultural exchange and promoting Sino-US friendship by using New Silk Road as its title. Silk Road is the world renowned route from the Chinese ancient capital Chang An to Rome.

“New Silk Road is symbol for friendly connections. Today we set out on the journey. I hope we can be back every year,” said Xihe Zhang, the vice president of China Broadcasting Performing Arts Troupe. 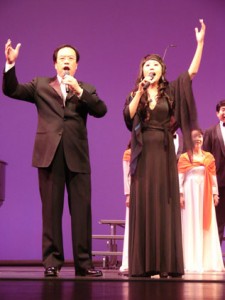 “Mississippi River is the best song to show CBC’s deep friendship with American people and the miss to overseas Chinese people,” said Yusheng Ji, the president of CBC as well as the producer of the New Silk Road. Ji mentioned that CBC had even invited the famous composer Shichu Teng to reedit Mississippi River from a solo song into a chorus.

At the end of the first half, two Chinese folk songs, Madrigal and A Half Moon is Rising, were also performed by mixed chorus as a cappella which meant singing without instrumental sound.

“I am very impressed that a cappella can be so beautiful in an auditorium,” said Ling Li, China National Class One Conductor. Li emphasized that most of time a cappella only worked well in a concert hall.

The second half of the performance produced a series of show-stopping climaxes.

On the stage, Jieshi Wang chatted with audience as old friends. He also prepared a version of “Edelweiss” from the musical The Sound of Music for non-Chinese speaking people. It is not the first time Jieshi Wang performed in America.

“I am always thankful for the audience support,” he said.

When singing Sunrise on Prairie, Tenor Feng Wang changed the Chinese lyrics a little bit by singing “the people in Twin Cities are passionate and kind-hearted, I wish you good health and happy forever,” which triggered rousing cheers and applause while he was still singing.

Singer Yingquan Zhang, Hua An, Mingda Zhong, Xuewei Song performed as the Men’s Quartet, among the earliest of their type to form in China. They sang in a jolly way with amusing body language which proved endearing to the audience.

According to the playbill, the quartet only performed two songs. However, since audience yelled “one more time” both in Chinese and English for more than three times, the quartet sang six songs totally. 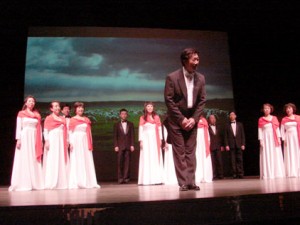 The show ended by a joint performance with Minhua Chorus with meaningful songs: Stay with US, a Chinese folk song; Auld Lang Syne; Song of Yangtze River. After that, CBC and MCDT exchanged gifts.  MCDT announced that they engaged Ji as art adviser and Li as guest conductor.

“Many people think this is the best show in Twin Cities in the recent 20 years,” Tianjiang Cui, the founder of MCDT and artistic director of The New Silk Road.

“It is rare for us to appreciate professional Chinese singing performance and also a good chance for my children to know Chinese culture,” said James, a Chinese-American who brought two daughters to the show.

CBC is a well-known professional performing group with a long history and great achievements. Established in Shanghai in 1953, CBC has cultivated many great artists such as Conductor Zhongming Nie , Shichu Teng, vocalist Chongmao Zhu, Kaiping Wang, Chushan Fang, Xiumei Yin and many others. CBC wins many awards inside or outside of China. In 2008, CBC involved in the chorus recording for the opening and closing ceremonies of the 2008 Olympic Games.

In 2009, CBC participated in the recording for the dance and music epic “Road to Prosperity” for the celebration of the 60 years founding of the People’s Republic of China. In 2010, CBC performed in Shanghai Stadium for the World Expo.

Cui revealed that MCDT does have plans about continuing cooperating with CBC. They will invite one or two professional performers from China every year for cultural exchange as well as teaching MCDT amateur singer and dancers. The coming event is on January, 2011.

To have such a fabulous show successfully done is uneasy. Zhang said CBC had prepared it for a long time in selecting songs, scheduling those famous performers, and raising funds. Cui added that visa was another tough issue.

Ms. Cui said that the Chinese performers earn less when in America than in China and they even paid for their own flight. In addition, they are really busy while they are here.

“They come here not for money but for spreading Chinese culture and enhancing Sino-US relationship,” said Cui.

The show is sponsored by Minnesota US-China Culture Exchange Association and MCDT. It is also supported by the grant from St. Paul Culture Star Program, Chinese Heritage Foundation Grants, Fund of the Minneapolis Foundation and the generous supports form business and individual donors.