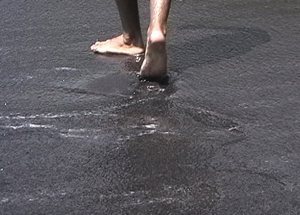 A screening of the dance film, “Maka’alae”, from Bryce Beverlin II and Romina Takimoto, will be part of the Cinema Revolution Society and The Southern Theater presentation of “Dance Film Project” on December 17 and 18, 2010 at The Southern Theater, 1420 Washington Ave. S., Minneapolis. The Opening reception will be held December 17 at 6:00 p.m. On each evening, December 17-18, there will be Program I at 7:00 p.m., followed by Program II at 9:00 p.m.

“Maka’alae” will be in the Program II Dance Films. Co-creators Bryce Beverlin II and Romina Takimoto produce rolling, crushing and tumbling waves of Maui that form into the tiniest of grains. It is as flesh resumes between sky and sea.

Takimoto is a dancer, video artist, and actress originally from Honolulu, Hawaii, transplanted to Minnesota in 2004. She has worked with Aniccha Arts, Ananya Dance Theatre, and the Body Cartography Project.

As a part of the inaugural year of the Minnesota Dance Film Festival, this third annual Project will premiere 25 new, originally created dance films by emerging and established local artists in two unique programs. Invited choreographers Shawn McConnoloug and Paula Mann will open the programs with video and stage works. Mann will premiere new solo, “Oh the Humanity,” in the 7:p.m. program and McConnoloug will restage the 2010 Sage Award Nominee for Outstanding Design, “subVert,” created for 2008 McKnight Fellow for Dance, Mary Ann Bradley.

“The Project was originally initiated by filmmaker, John Koch, as a platform for local choreographers and directors to dialogue and experiment with this hybrid medium, pushing dance and film in new directions and affecting the way we perceive life and art,” said festival director, Vanessa Voskuil. “This is CRS’s third successful year with this artist initiative and so far we have supported over a 100 local artists in the presentation and creation of new dances for the camera. Due to this success we are excited to expand the Project into the Minnesota Dance Film Festival.”

Minnesota Dance Film Festival celebrates and promotes the genre of dance film. Dance film, or  “screendance,” is a unique cinematic experience that focuses on the intersection of cinematography and choreography. The 2010 inaugural festival will present new and existing work by local artists and international documentary screenings. This years presenting partners are The Southern Theater, Minneapolis College of Art and Design and the Germanic-American Institute.

Tickets are $10 for a single program, or $15 for both programs. Contact the Box Office at 612-340-1725 or online at Southerntheater.org. For a full festival schedule see www.cinemarevolution.org.

Cinema Revolution Society, founded and lead by executive director John Koch, is a nonprofit organization that is committed to invigorating film culture in Minnesota through a variety of programming of local, domestic and international films. CRS connects local artists and organizations through its presenting and commissioning programs and offers open forums and discussions on film theory and history.

Revisioned ’42nd Street’ is Broadway at its best