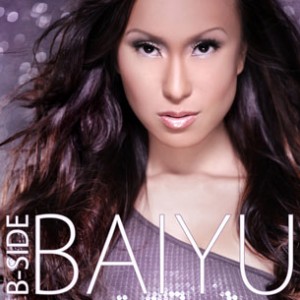 New York, NY (December 7, 2010) – Baiyu is released her debut album, “B-Side” Tuesday with a media event held by her label, JMD/INgrooves/Universal. “B-Side” is a unique fusion of 90’s inspired R&B and synth pop with singer/songwriter underpinnings, not unlike Baiyu’s upbringing and primary influences. The entire album was written solely by Baiyu, and sung in her own words.

“This project,” explains Baiyu “has its roots in not only my musical core, but in my personal experiences. Each song can be tied to such specific moments in my life that I almost feel a kind of nakedness in sharing them with others. Yet, I remind myself that this very fact is what is most exciting about the release, and is what I, and my fans, have been waiting for.”

The EP, consisting of four full songs and an intro that shares the title of the album, will be Baiyu’s first ever full release, and a highly anticipated project for JMD. Baiyu has been working tirelessly for the past few months with Mike Thompson, the Vice President A&R at JMD Records/ Universal Music Group, to complete a project that both she and the label are extremely proud and excited.

“Mike has been a wonderful resource for us and an amazing mind to work with” comments Val, Baiyu’s manager. “Baiyu and I both feel very confident about the success of this project partly because we are in such capable hands. The type of support that JMD has shown us throughout this entire process has been quite a blessing.”

In the recent months, Baiyu has gained notoriety for her music being featured by Funkmaster Flex, Karen Civil, You Heard That New, R&B Xclusive, and landing on the homepage of The Source. Her latest effort, “B-Side”, will allow her fans and supporters to finally have access to her first ever EP.

According to the artist’s website, www.baiyuonline.com, Baiyu was born in Xiamen, China. Raised in a musical family, she was singing in school choirs and could read and compose music by the age of six. Her family moved to Gaithersburg, Maryland when she was eight years old and she took an interest in American popular even before she could speak English.

Baiyu immersed herself in activities outside of music such as kickboxing, Chinese dance, ballet and modeling. As a model and actress, she has worked with Seventeen magazine, appeared in four independent films, and was a host for MTVu’s hit show “The Freshmen” for three years.

Irrespective of her hopes to become an entertainer, she remained focused in her studies where she graduated in 2008 from the number one ranked Princeton University, where she was a member of the Black Arts Dance Company and a vocalist for the University’s Jazz Ensemble.

“B-Side” is available for purchase and download via iTunes, and various other digital distribution outlets. Hear the entire album and get audio widget on Baiyu’s BandCamp: http://baiyu.bandcamp.com/album/b-side.