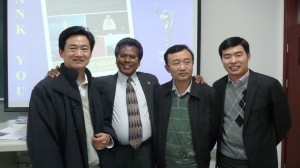 BEIJING (November 29, 2010) – As part of his international book and lecture tour in Asia, Sri Lankan-born Professor Patrick Mendis stopped over in Sri Lanka to give a public lecture on the “secret” mission of America’s Founding Fathers, which was organized by the U.S. Embassy at the American Center in Colombo.

Mendis is the author of the highly acclaimed book, Commercial Providence: The Secret Destiny of the American Empire. George Washington University’s president emeritus Professor Stephen Trachtenberg wrote the introduction to the book and endorsed by former U.S. Senator Tom Daschle.

During his visit, the award-winning former American diplomat and NATO military professor met with Sri Lankan Foreign Minister G. L. Peiris at his office in Colombo. They previously met when the Minister was in Washington D.C. to consult with American Secretary of State Hillary Clinton.

In Singapore, Professor Mendis met with Deputy Prime Minister and Minister for Defense Teo Chee Hean and discussed US-China relations in the Indian Ocean and the South China Sea. Both Mendis and Teo are alumni of the Harvard University. Mendis serves as an advisor to the Encyclopedia of Sri Lanka Diaspora project at the National University of Singapore.

After giving lectures in the Philippines and Hong Kong, Professor Mendis traveled to the Guangdong University of Foreign Studies in Guangzhou, where he is a consulting professor of international affairs. He consulted with the provincial government officials about Sino-Sri Lanka relations as well as Sino-American trade issues.

His book tour took him to Beijing where he met with senior government officials and Chinese diplomats. Professor Mendis gave a series of lectures at the Beijing Administrative College, a premier civil service training university in China. He also taught at the China Youth University of Political Science, previously headed by Chinese President Hu Jintao.

A regular visitor to China, Professor Mendis spent time in teaching at the Northwestern Polytechnic University in Xian before he joined the U.S. State Department in 2000.

Currently, he is an affiliate professor of public and international affairs at George Mason University in Fairfax, Virginia. During his world book tour, he has been traveling to many countries during the entire month of November.

Similar to his previous books, Professor Mendis has donated the proceeds from this book to fund scholarships and a peace prize at Sarvodaya in Sri Lanka, his native country.