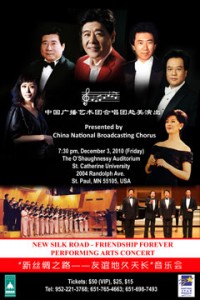 Minnesota Chinese Dance Theater presents its “New Silk Road – Friendship Forever” concert with the China National Broadcast Chorus of China on Friday Dec. 3 at 7:30 p.m., at O’Shaughnessy Auditorium of St. Catherine University, 2004 Randolph Avenue, St. Paul, MN 55105. The China National Broadcast Chorus is internationally known as one of the best professional choruses of China. They reached a wider international audience in June 2006, when they performed with the Three Tenors in the Forbidden Palace, and for its work with the 2008 Beijing Olympics opening and closing ceremonies.

For the past 50 years, the China National Broadcast Choir has had countless international appearances and recordings. With thousands of recordings and hundreds of concerts it is indisputably the number one professional choir in China.

Many renowned artists have started their careers with this group since it entered prominence in 1957, in a stunning concert without any orchestra.

In 1964, the choir performed in the epic musical, the East is Red. In 1988, they entered the International Choir competition in Japan and won three gold metals and one silver. In 1991 and 1992, they performed in Japan and Macao.

The choir held concerts an “Evening in Moscow” concert in Beijing, showcasing Russian songs to rave reviews. In 2000, they staged their multi-media concerts with huge LED screen in the background. In 2003 and 2004, the choir performed Aida and Othello during the Arts Festival in China.