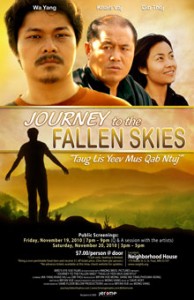 ST. PAUL (November 11, 2010) – After being diagnosed with a terminal illness, a Hmong-American man returns to Laos to pay tribute to the late father he never knew. What follows is a personal journey spanning two worlds. Incorporating culture, spirituality and the relationship between a son and a father.

Journey to the Fallen Skies” (Taug Lis Yeev Mus Qab Ntuj), a feature film from Bird’s Eye-Vue and Hmong Bro’s Productions, will have its debut screening on Friday, November 19, 7:00 p.m. and a second screening Saturday, November 20, 3:00 p.m. A Q & A session with the filmmakers will follow the Friday screening.

The screenings will take place at the Neighborhood House Theater in the Paul and Sheila Wellstone Community Building, 179 Robie Street E., St. Paul, MN 55107. Parking is free on the ramp adjoining the building.

Cash admissions of $7.00 per person. Bring a non-perishable food item for the Neighborhood House Foodshelf and receive $1 off admission.

The film is written and directed by Bryan Vue and Mong Vang, and stars Wa Yang as Leng, who is aided in his journey by a resort owner and a village girl to contrast the traditional from the American Hmong.

“In a nutshell this film is about going back to your roots,” said Bryan Vue. “Leng wanted to know who his father was and how he made him who he is today – full circle.”

With this his debut feature film after several shorts, Vue said he would like people to enjoy the film for what it is – a story – and if the layers of culture make people find something valuable to relate to their own experience then all the better. He said at its core the film is about the issues and emotions of people. He doesn’t think it’s a tear jerker but that is up to the viewers.

“People without a dad are to relate to it,” he added.

Khais Vang plays Joua Pao, the resort owner who observes Leng’s deteriorating health and emotional state and begins to care for him. The directors describe him as a “quiet and observant” actor until the cameras are rolling when his characters come to life.

Dib Thao portrays Gao Hlee, the village girl who befriends Leng, and nudges him along with questions to challenge his fears.

Considered the most popular Hmong actress and singer in Asia right now, Vue admits to being embarrassed for not knowing who she was ­– but also recognizing her tremendous talent in her audition.

Vue said that a sensitive project like this could not dabble in the aspects of Hmong culture and beliefs. The story needs to portray an accurate picture and incorporate these beliefs in the appropriate way.

“It is about what Hmong people believe for the most part, and about what happens after we die,” said Vue, who explains that it is about one person reconnecting with his late father as he prepares for his own journey and reuniting with his ancestors.

It is a drama, however, and Vue said they chose not to get into all the rituals and they don’t use the shaman. He said that what they do use is consistent with these traditional elements.

To get it right they brought in Phouma Xiong as the Cultural Consultant. He is a Lawrence University graduate wit a degree in Far East Studies, Anthropology and Economics. He is also a storyteller and member of Hmong Writers and Cultural Artists.

Vue said they also refrained from dragging in a lot of the contemporary issues of the Hmong in Thailand and Laos going on right now, with forced repatriation, the grave desecrations and the status of Hmong in Laos.

“This is a personal story told from Leng’s perspective and there are not a lot of the local issues going on,” he said. “This is not about that. It is about Leng’s struggle, his own dilemmas.”

This film works as a “journey within a journey and with a cultural component,” said Wa Yang.

“We had to dramatize as entertainment and staying true to the original vision was the hardest thing,” Yang said. “It’s a wonder the film makes sense at all or that people would like it for the way it is told 1-1/2 hours.

There are scenes in the beginning and the end of the film in the Twin Cities but the story takes place in Laos and is filmed almost entirely on location in remote areas of Thailand. They took advantage of some great cinematography but didn’t want to have the beauty of Thailand take over as the center of the story.

“We want the audience to go on a journey too,” said Yang.

Wa Yang is a native Minnesotan who has been performing for over 10 years on stage, TV and film. He made the move to Los Angeles a few years back and was a featured extra in the Clint Eastwood feature film, Letters From Iwo Jima. He also supported the effort to recruit Hmong actors for Eastwood’s film, Gran Torino.

Yang said that as a St. Paul-born Hmong, and having lost his own father, a former Hmong soldier to pancreatic cancer in 2002. He wanted to learn more about the life of the man who brought his family to Minnesota.

Although bi-lingual in English and Hmong, Yang said he was much like his character in feeling out of place in the more traditional Hmong village settings of Thailand.

As a co-producer with Mong and Vue, he said three worked hard to tell a culturally based story form the experience of a Hmong American.

“That is what needs to be told now for the mainstream and Hmong American community,” said Yang.

The team worked well together despite artistic differences, because they always believed it was a joint project, he added. There were defined roles but they were willing to be flexible in dealing with the unknown when change meant making a better film.

“It was a collaboration of Hmong American artists in the truest form,” he added. “We are individual artists who are able to work together for the beauty of something not yet seen in the Hmong community.”

Yang has a B.A in Marketing Entertainment Diversity from Metropolitan State University and a Minor in Business Administration. He has also studied theater with the SAG Conservatory. He currently works as the API Community Health Worker at Neighborhood House.

“Wa was a huge part of the production and the cast and crew,” said Vue. “I forget what a great actor he is in addition to helping the storyline and producing, and managing the funds while we over there.

Yang said the film reflects the evolution of Hmong American film. As Hmong become Hmonglesh and the audience becomes young, the films are dealing with issues of identity, history and legacy.

With the median age of Hmong Americans at around age 16, compared to 35 in the mainstream, Vue likes to focus on the experiences and concerns of emerging youth and twenty somethings’ that are comfortable living in two or more cultures.

Vue was born in Boulong, Laos and raised in Eau Claire, Wisc. He made his first short film at age 14, a fan of Bruce Lee films, he said the martial arts legend inspired him as the only Asian movie star of his childhood that he saw.

The film bug never left him, however, and Vue went on to learn professional level filmmaking at IFP MN and perfected his art with family documentaries, short films and industrial projects. He founded Bird’s-Eye Vue Films in 2007.

1 thought on “Journey From The Fallen Skies”