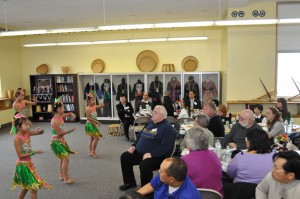 The school, which opened in the former St. Colomba School in 2007, moves with its founding Principal Mo Chang, who welcomed the guests and talked about the history of the school at its new location.  The school mission is to have a community-based approach to education that emphasizes high academic standards, integrates Hmong language and culture into its curriculum, and promotes parent and community ownership of the school.

Chang said the new facility works out very well for them as nearly 70 percent of its students live in the area. She said they outgrew St. Colombo and the convenience of the new location has in part contributed to an increase in enrollment.

Currently, 650 students attend the school from Kindergarten through the 8th grade. In addition to being a Hmong Charter School they also offer Chinese to their students and are in the process of becoming an international Baccalaureate School (IB). The school is also working with a Hmong artist and two Hmong murals that will help the school better reflect the community it serves.

CMSE students serving as event ambassadors lead guests to the function. Aside from the buffet lunch with traditional Hmong food and fresh fruit, guests were entertained by the school dancers that have been competing across Minnesota and Wisconsin.

Father Michael Anderson, Pastor of St. Bernard’s Parish; St. Paul Councilman Lee Helgen and Dr. Blong Xiong of the University of Minnesota were among the dignitaries in attendance.

Hamernick Decorating was very generous in assisting the school with its painting needs.

CMSE is unique for its global connection to Hmong communities around the world, and its attention to students needs – both in and outside of the classroom.

Founding Principal Mo Chang, who has worked the past 21 years in the Saint Paul Public School System, said the new charter school will be rooted in the Frogtown and Midway communities, with partnerships ranging from Concordia University to the Center for Hmong Arts and Talent, and Hmong American Partnership.

Principal Mo Chang earned a degree in Education from Metropolitan State University, and a Masters in Education, Teaching and Learning, from St. Mary’s University, where she also received her Principal and Superintendent’s License. She is currently pursuing her Doctorate in Educational Leadership at St. Mary’s.

Chang began working in the SPPS as a teaching intern while earning her bachelor’s degree and then moved into administrative roles. She has served in many capacities, including as a summer school principal, a district administrator, and as an assistant to the superintendent.

Their next major event will be the school’s New Year Celebration to be held on December 17th. For more information about Community School of Excellence:  Contact Mo Chang at 651-917-0073.