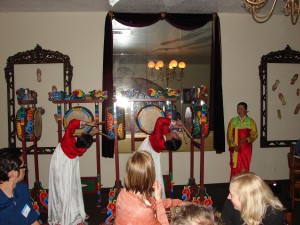 MINNEAPOLIS (October 14, 2010) – The Asian American Journalists Association – Minnesota Chapter, held its Taste of AAJA fundraiser last week at Bombay Bistro in Minneapolis. The event was designed to continue the AAJA mission to ensure fair and accurate coverage of Asian Americans and Pacific Islanders and to encourage more Asian Americans to pursue journalism. Proceeds from the gala went to fund scholarships and internships for promising high school and college journalism students and to train journalists and community leaders on media-related issues.

The organizers said they were pleased with the turnout and that the Bombay Bistro restaurant in downtown Minneapolis as host was a change that allowed the volunteers to get the same result with fewer hours involved in event preparation.

Instead, they focused on a silent auction that included everything from sports and theater tickets to a football signed by Brett Favre, and framed professional sports and arts images taken by professional photographers working for the Star Tribune and Pioneer Press.

AAJA Minnesota presented Thom Fladung with the first AAJA Minnesota Leadership in Diversity Award. This award honors an individual who has made great strides in promoting and demonstrating diversity in the news industry.

Fladung was credited with a commitment to cultural awareness in his role as editor of the St. Paul Pioneer Press since 2005. He previously served as managing editor at the Detroit Free Press.

“Thom strikes to break down stereotypes, misunderstanding and misinformation by promoting multiculturalism in education, newsrooms and news coverage,” stated AAJA President Thomas Lee in presenting the honor. “Thom has been a strong supporter of AAJA Minnesota, including partnering with us to bring diverse students into the newsroom through an internship program that provides students with journalism education and mentorship.”

Fladung serves on the Board of Advisors for ThreeSixty, a multicultural Minnesota youth journalism program out of the University of St. Thomas. In his role with the American Society of News Editors he is said to also promote leadership, innovation and diversity in news.

Fladung said that he began working with Pioneer Press when it was under Knight Ridder and that he still carries the organizations call to diversity card in his wallet today – which reads, “Diversity, no excuses.”

“You can’t do great journalism without diversity,” said Fladung.

Zhang Ying was as a professional musician in China for 40 years, awarded the title of First Class Composer, and received the nation’s highest national arts award – the Wen Hua prize – before moving to Minnesota twelve years ago. His handmade instruments from wood, bone and many natural materials are based on known instruments dating back more than 9,000 years.

For the AAJA, Zhang Ying created ambiance by performing during the reception time before the main program began.

A National Merit Scholar and U.S. Presidential Scholar candidate, Isabella Dawis has performed as a singer and pianist at venues including Orchestra Hall, the Ordway Center, the Fitzgerald Theatre, the Minnesota State Fair grandstand, and the Metrodome.

As a vocal soloist, she has performed with the Minnesota Opera and Minneapolis Pops Orchestra, and has won top awards from the Thursday Musical Young Artist Competition and the National Classical Singer high school competition.

As a musical theater performer Dawis has appeared at the Guthrie Theater and the Children’s Theatre Company. As a Filipina youth she broke the mold of a red-haired freckled girl by as Annie in the Chanhassen Dinner Theatre production. Her most recent role was Tuptim in The King and I at Bloomington Civic Theatre.

For the AAJA program, Dawis performed a song from her role in the Mu Performing Arts production of The Walleye Kid. The story centers on a Korean adoptee girl in her journey of self-discovery and identity.

The Walleye Kid playwright, Sundraya Kase, was also in attendance at the AAJA event. Dawis also performed a favorite ballad of the Philippines.

Chang Mi Korean Dance & Drum (www.changmi.org) was founded in 1984 to share Korean heritage, foster friendship among Korean American children and provide support for adoptive parents. Over the past two decades, hundreds of Chang Mi students have learned about their Korean heritage through traditional Korean dance and drum.

David Mura, a poet, creative nonfiction writer, critic, playwright and performance artist, is a Sansei Japanese American raised in Chicago and a Minnesotan since the 1970s. He said that as people now try to say that race had no bearing on the internment of Japanese Americans, he also it is also bears similarities to how Muslims, Middle Eastern and Arab Americans are being treated today.