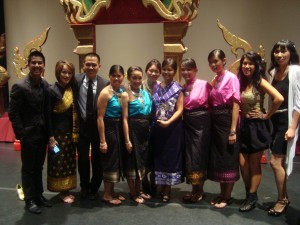 The first Annual Lao Artists Festival was held in Elgin Illinois on August 21st to celebrate the US and Lao communities and the accomplishments of Lao artists, including many from Minnesota. Numerous disciplines were reflected at this national gathering, including Music, Dance, Film, Fashion, Theater, Photography/Photojournalism, Arts and Crafts, Interactive Media, Visual Arts and Writing.

Organized by the Lao Professionals of Illinois, the festival featured non-stop activities on August 21st from 11:00 am until midnight at the Hemmens Cultural Center of Elgin, Illinois. The Hemmens Cultural Center opened in 1969 and has been a key fixture in the cultural life of the city of Elgin. A, 1,200 seat theatre, it has hosted entertainers including B. B. King, Bob Newhart, Garrison Keillor, Blue Oyster Cult and many more. The festival was well-attended and offered something for just about everyone.

Minneapolis artist Mali Kouanchao was recognized by the festival with an award for her outstanding accomplishments as a visual artist. She demonstrated her Displacement: Never Free series and discussed her creative journey over the years early in the event. Lao American writers Saymoukda Vongsay of Minnesota and Catzie Vilayphonh of Philadelphia led an excellent talk on the directions of Lao poetry and spoken word with North Minneapolis writer Bryan Thao Worra, who received the Lao Literacy Award.

The community enjoyed a professional arts and handicrafts exhibition, authentic Lao food, traditional dance demonstrations and music performances in a variety of traditional and modern styles. Fashion was a key feature of the festival, particularly highlighting the work of designer Kevin Vong. Actor and writer Ova Saopeng performed a spirited excerpt of the play Refugee Nation, coming to Minneapolis in October at Intermedia Arts, and he and his wife Leilani Chan were recognized for their work in the theater arts.

The audience was treated to exceptional demonstrations by Lao khaen master Bounseung Synanonh and singer Malavanh Douangphoumy, while the acclaimed Kinnaly dance troupe of Seattle, Washington demonstrated Lao traditional dance techniques. Acclaimed director Thavisouk Phrasavath could only be present briefly, despite original plans, because he had to fly to California to receive an Emmy his film, Nerakhoon: The Betrayal, won.

Photographer Khampha Bouaphanh showed the participants examples of his work covering Hurricane Katrina, the war in Iraq, Tsunamis and even the occasional sporting event, and it was clear how he won photojournalist of the year twice from the Houston Press Club. Sisavanh and Oulinthong Sihanath spoke about preserving Lao traditional arts such as jewelry, sculpture and costumes from Elgin, Illinois.

Elgin, Illinois produced many significant Lao artists over the last 30 years, including the musician Ketsana, film-maker Bake Phouikham and interactive media artist Nor Sanavongsay, who demonstrated two of his forthcoming projects, Kiwi the Green Koala and a story based on the classic Lao folk hero Xieng Mieng. It was at least six hours for most of the Minnesotans to drive to the festival, but everyone agreed it was worth it. Elgin has one of the largest Lao populations in the Midwest.

Lifetime achievement awards recognized the legendary singer Silavong Keo of the Strangers, and Vordeth Viravong, whose songs inspired and entertained Lao around the world for decades, and whose influence continues to be felt to this day.

Lao rapper Gumby aka Pryce also came from Minnesota to perform his signature songs. Alex San Dinero, a pioneer of a musical style he calls Laoggaeton, and Tommy of IBU also performed. Mino Sundara and Vannasone Keodara served as the emcees for the evening. It was a rare event to see so many acclaimed artists together for one event, and many hoped the festival would continue for years to come. For more information you can visit www.laoartistsfestival.org.