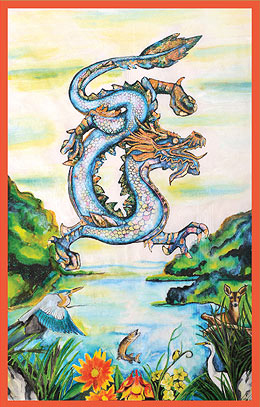 ArtStart will present its annual fall festival, the “Children’s EcoArts Festival” on Saturday, October 9, 2010 from 12-5 p.m. in Mears Park and Cray Plaza (formerly Galtier Plaza), in Saint Paul, Minnesota. A free family event, the festival celebrates the common bond as one people reliant on a healthy environment, most especially water, through the arts.

The event opens with a parade and performance of “The Magic Whip”, an original composition commissioned by ArtStart and composed by Chinese flute master,Ying Zhang and Minnesota composer Jan Gilbert.  Based on a children’s play by New York author Leslie Li, in which the Emperor and Dragon King are prepared to flood the land to settle a dispute until a farmer and his daughter save the day, the ancient folktale serves as a modern day morality play about environmental challenges worldwide.  Scored for traditional Chinese flute, symphony orchestra and whip, the piece will performed by the Saint Paul Civic Symphony under the direction of Jeffrey Stirling. Narration of story by Leslie Li and Mindy Ratner of Minnesota Public Radio.

Founded in 1988, ArtStart’s mission is to inspire artistic creativity and illuminate the connections among people, ideas and the environment through engaging artists, children, families, and communities in quality arts education. Two of the organization’s best efforts to link the arts and environmental stewardship are ArtStart’s ArtScraps Creative Materials Reuse Center and ArtStart’s arts-based watershed curriculum, River EcoJourneys. The majority of ArtStart’s programming is built around its belief that we all live at the intersection of art, culture and the environment. For more information, visit www.artstart.org.