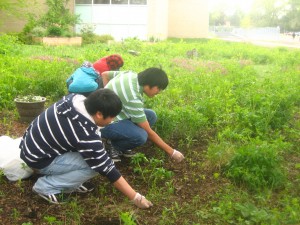 St. Paul, Minn. (September 10, 2010) – As school kicks off, Admission Possible celebrates its 10th anniversary serving low-income students, having grown services more than 200-fold since the organization’s founding in the Twin Cities on Sept. 11, 2000. In its biggest program year yet, Admission Possible will work with more students than ever before and, to help coach these students to success, will welcome its largest team of AmeriCorps members.

Admission Possible will serve 7,100 Twin Cities students through its high school and college programs, a large jump from the 35 students served in the program’s inaugural year. This year, 1,400 high school students will participate in 17 partner high schools across six school districts in the metro area, while 2,700 high school program participants work toward their degrees with the support of the college program.

To help these Admission Possible students succeed, 53 AmeriCorps members and 3 AmeriCorps VISTAs will contribute over 100,000 hours of service.  These recent college graduates will serve as college coaches to students and in organizational capacity building roles.

“Perhaps the most exciting part of this program’s growth is that as the number of participating Admission Possible students grows, so does the number of low-income students who will reach their goal of attending college,” said Bethany Baker, program director for Admission Possible. “The enthusiasm and talent of our AmeriCorps members helps our students channel their potential. When they arrive to start a new school year, their energy for positive change brings our students closer to making their dreams possible.”

Admission Possible has achieved impressive results over its past decade of service. Ninety-eight percent of its students have gained admission to college, and juniors have raised their ACT test scores by 20 percent. The collective hard work of Admission Possible students, staff and community supporters has achieved the remarkable – a path out of poverty for low-income students.

In 2009, at an event in the White House, Admission Possible received national attention for its work as an innovative nonprofit by President Barack Obama, who stated at the time, that, “Ninety-nine percent of the Admission Possible class of 2008 got into college – 99 percent. The vast majority stay in college and earn their degrees. Admission Possible operates in just two states now. So imagine if it was 10, or 20 or 50.”

Serving the Twin Cities and Milwaukee today, Admission Possible is continuing to answer that call by working under a multi-year growth plan to reach 20,000 low-income students annually in 10 sites nationwide as soon as 2015. The organization is slated to launch a third city in the 2010-11 academic year.

“We are thrilled to celebrate the success of our students and our organization on its 10th anniversary,” said Jim McCorkell, founder and CEO of Admission Possible National. “As we celebrate the accomplishments of the almost 25,000 students we have served, we set higher goals for ourselves and the students we will reach in the future. When we see what they achieve, despite many obstacles, we find the inspiration to work harder to make college access possible for more students.”

Admission Possible is a nonprofit organization founded in Minnesota in 2000 and dedicated to helping promising low-income high school students prepare for and earn admission to college by providing ACT/SAT test preparation, admissions and financial aid consulting and guidance in the transition to and through college. The program currently operates in two metro areas – the Twin Cities and Milwaukee, with the goal of working in as many as 10 cities by 2015.

In 2010-11, Admission Possible is serving 1,600 low-income high school students through its core program, supporting 2,750 high school program participants as they pursue a college degree and providing 3,000 freshmen and sophomores with college planning workshops. Since 2000, 98 percent of Admission Possible students have earned admission to college. www.AdmissionPossible.org