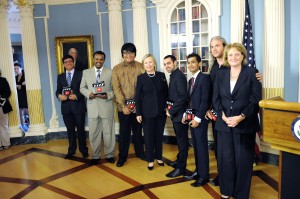 Washington, D.C. (September 10, 2010) – U.S. Secretary of State Hillary Rodham Clinton, and Under Secretary for Public Diplomacy and Public Affairs Judith A. McHale on Friday presented honors to the six 2010 Democracy Video Challenge winners in the Treaty Room at the U.S. Department of State in Washington, D.C.

The State Department program reaches out annually to young filmmaker to create two-minute videos that complete the phrase “Democracy is…” There are seven winners – one each from the Western Hemisphere, Europe, Middle East/North Africa, Sub-Saharan Africa, South and Central Asia, East Asia/Pacific and one anonymous winner that receives no personal recognition for their own safety or other reasons. The six publicly identified winners from six geographic regions traveled to the United States this week.

“Well, we’re very proud of these winners and we are looking to follow them with great interest,” said Secretary Clinton. “We hope that this not only confirms their own ideas, but actually serves to generate more from them and encourage others to join their ranks.

Clinton said the day is meant to celebrate the young activist filmmakers who use technology to make their voices heard and, by doing so, “giving voice to so many millions of others.”

The winners were selected by online voting via YouTube and videochallenge.america.gov. According to Clinton, more than 3.5 million people around the world were reached by the video as viewers or voters. It was noted that 65 percent of the world are under the age of 30.

Clinton said the Challenge is open-ended and meant to spur ideas on ways to build on the freedom that democracy provides for individuals to pursue their own dreams.

“Each of these young winners has captured six different visions of democracy – some satirical and lighthearted, some poignant and haunting – but each shaped by their own experiences and expressed through their own unique artistic lens,” she added.

She said that not all democracies look or behave exactly the same way and noted the Nepal film in particular as a way to show where fundamental tenets are non-negotiable.

“The videos we are honoring today capture essential truths about democracy across the world and respond to the deepest yearning of human beings to have a right to their own lives and their own dreams,” she said. “Democracy is about fair play. Democracy equalizes the voices of people. And democracy is a learning process.”

Yared Shumete, born in Addis Ababa, Ethiopia, said his entry, “Fair Play”, was inspired by a talk with a friend in which he concluded, “Even if you are not on the top, you are still in the game.”

Shumete began editing short movies in 2003, and has also written short movie scripts. He founded the Alatinos Filmmakers Association with fellow filmmakers in 2004 and currently serves as its president.

The AFA educates young filmmakers through weekly training and discussion programs and works to improve the current conditions for filmmaking in Ethiopia.

Adhyatmika was born in Jakarta, and is a graduate of the Puttnam School of Film, Lasalle College of The Arts in Singapore. He developed a passion for filmmaking while still in high school and his work has since been featured at international film festivals.

As a filmmaker who views the medium as a way to transcends geography, race and age, Adhyatmika said he was intrigued by the Challenge topic.

He started on the premise that democracy is a subjective term that is not easily defined. “Democracy is not a thing,” he said, “it’s a process.” Thus, the film expanded on that idea as a surreal, satirical comedy about democracy as it is applied to everyday life in Indonesia.

Joel Marsden is a writer, producer and director who has worked on television and film projects in the United States, South America, Europe, the Middle East, Asia and Africa. His inspiration for the Challenge stems from to put eight years collaborations with an international team of democracy activists together constructing the first World Vote, where every man and every woman on the planet can have an equal voice.

“The Democracy Video Challenge offers a great opportunity to spread our message of global democracy,” he says.

His other work includes the feature film Ill-Gotten Gains, about an uprising aboard an illegal American slave ship in 1869, and the feature documentary film World Vote Now, which deals with the construction of the first global democratic system.

Farbod Khoshtinat is 21-year-old Iranian filmmaker who says he was motivated to participate in the Challenge use visual arts to show the world “how democracy is practiced in my country.”

“I believe that one of the greatest things about art is that it gives us the ability to see, imagine and feel things in a certain way,” said Khoshtinat.

Anup Poudel is the son of a politician from Kathmandu, Nepal. He credits his father’s involvement in three democratic movements in Nepal with inspiring him to create his entry for the 2010 Democracy Video Challenge.

“The internal conflict in Nepal, political instability and several crises have degraded the sovereignty of the people. Therefore, I used this video to unite the people for this mutual goal,” he says.

The 20-year-old Poudel is currently working on a bachelor’s degree in film studies and has made a number of other films, including a prize-winning one on climate change called My Green Home.

His works include Los Fantasmas Del Palacio (The Ghosts Of The Justice) (2007) about the takeover of the Justice Palace in Colombia by the guerrilla group M19, Justos X Pecadores (Just For Sinners) (2008) about animal rights in Colombia and Osos Abandonados (Lost Innocence) (2009) about war children in Colombia.

His documentaries have been screened at film festivals in Colombia, Brazil and the Czech Republic.