Japan’s legendary all-girl rock band, Shonen Knife, is returning to Minnesota in support of their upcoming full length CD, “Free Time”, set for release on August 31, 2010 from Good Charamel Records). The band makes rolls into Minnesota as part of its 2010 North American Tour on September 20, 2010, 8:00 p.m. to play The Cave on the campus of Carleton College in Northfield, before heading off on the remainder of its Midwest and Eastern U.S, and Canadian stops.

So Cow, a band from Tuam, Ireland, will open for Shonen Knife.

After three decades of recording and touring Shonen Knife is still going strong with a new album, “Free Time,” containing their trade-mark sound of hard-pop, especially on the opening track, “Perfect Freedom”, and “Capybara.” It also contains the band’s mellow, feminine touch here and there – as on “Love Song”, and even on “Monster Jellyfish.” 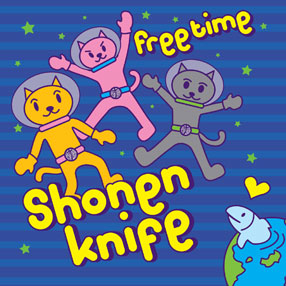 Founding member, guitarist and vocalist, Naoko, said she was raised on American and British Rock and Roll in Osaka, and formed Shonen Knife in 1981. She is the sole remaining member of the original trio, but fellow founding member and sister, Atsuko, still joins her on stage to play bass and sing now and then.

Find out more about tickets at http://apps.carleton.edu/student/orgs/cave/