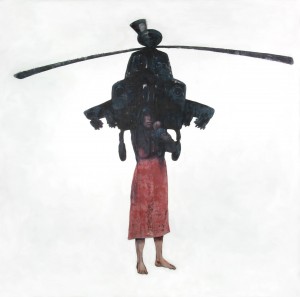 The Iraqi and American Reconciliation Project announces the opening of The Art of Conflict: Identity in War and Displacement on July 29, 2010 at the Tarnish and Gold Gallery, 1511 Marshall Street NE, Minneapolis. The IARP seeks to promote reconciliation between the people of the United States and Iraq in response to the devastation affecting Iraqi families, society, and culture. It recognizes the common humanity of the people of Iraq and the people of the United States.

The visual art exhibit will feature works about violence and displacement from Iraqi and American artists. The opening event, which runs from 7:00 to 10:00 p.m., will include music, refreshments and an opportunity to meet the featured artists.  The gallery will host the artists’ 30 pieces of original work until August 28.

“A process of reconciliation between two groups of people must involve honest, creative dialogue about the past and its effects on the present,” said Tricia Khutoretsky, curator.

“The Art of Conflict will open that dialogue and engage Minnesotans in experiencing the impact of war and displacement through art,” she added. “Foreign conflicts can often seem far away, yet they are a continuing reality for many Minnesotans.”

Minnesota is home to around 90,000 refugees and 400,000 veterans. The Art of Conflict will provide an opportunity for these Minnesotans, and for all Minnesotans, to reflect on the human costs of war from both American and Iraqi perspectives.

The show’s programming will also include: a film screening of The Unreturned, an award-winning documentary about five Iraqi refugee families produced by Nathan Fisher, a Minnesota native; talks by veterans, refugee groups, and others with experience of war and displacement; an arts therapy group for mental health professionals; letter-writing to Iraqis; and special tours for school groups.

A digital gallery of the artists’ work will be available on the IARP website, http://reconciliationproject.org.