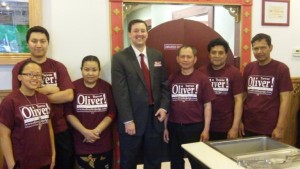 Oliver spoke about his background as an Army officer and his experience as a prosecutor and city attorney. He and spouse, Kaela Meyers, are also active in the Southeast Asian community.

Oliver (www.oliverforjudge.com) said he believes courts should be open, efficient and fair. He said he has a plan to process the backlog of misdemeanor cases efficiently but effectively in order to free up Ramsey County judges to take on more cases that can wait from six to nine months for a jury trial.

He said he also supports Ramsey County initiatives for Drug Court, DWI Court, and Mental Health Court. The specialty courts, he said, should continue to expand to initiate a Veterans Court that applies these models to the problems experienced by some of the men and women returning from military service in Iraq and Afghanistan.

Mr. Sok went on to say, “Trevor respects and values different cultures. He works hard to make sure that people are treated fairly regardless of their background. I am confident that Trevor will be an excellent judge and a voice of the Southeast Asian community in the Ramsey County judicial system.”

Sam Poe, a St. Paul resident, is also an enthusiastic supporter. He brought his wife, mother, and three children to the fundraiser. Mr. Poe believes that, “Trevor is a good person who will be fair to everyone and will make a great judge.”

Vithue, Sam’s 11 year-old son, has already been out in his neighborhood campaigning for Trevor.

Neighbors attending the event said they were impressed by Vithue’s knowledge and interest in politics. They said they were as equally impressed with Oliver for “igniting such keen support from someone so young.”