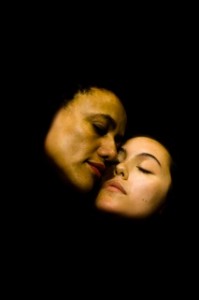 Pangea World Theater will produce the world premiere play Ady July 9-25, 2010, Thursday – Sunday, 7:30 p.m. at the Playwrights’ Center, 2301 East Franklin Avenue, Minneapolis. Written by Rhiana Yazzie and directed by Hayley Finn, Ady is a thought provoking story of Adrienne Fidelin (Ady), a dancer from the island of Guadeloupe. The play combines dance and image, history and imagination to bring her story to life.

Ady is the final show in Pangea’s Alternate Visions Festival. This Festival has presented readings, works in progress and now this world premiere.

“We are pleased to present the world premiere of Ady by Rhiana Yazzie,” commented Pangea’s Artistic Director Dipankar Mukherjee. “Pangea commissioned and supported the evolution of this original piece over the past two years. Rhiana’s craft and precision in creating this relevant literature is artistically rich and complex and politically relevant.”

“Pangea’s commitment to Native Artists through presentation of local, national and international artists has enriched the cultural scene in the Twin Cities,” he added.

The jumping off place for this play is a Lee Miller photograph of surrealist artists including Ady, who is naked to the waist. Ady was a dancer from the island of Guadeloupe who dated surrealist photographer, Man Ray in the late 1930’s through 1941 when they were eventually separated by WWII. The two of them were surrounded by the great artists of their time including Picasso, Lee Miller, Leonora Carrington, Max Ernst, among others.

Although the other women in this surrealist circle have stories with a beginning middle and end, pieced together by historians and art critics over the years, Ady’s story was lost in the narratives that made those around her great.

“She comes alive through the lens of a contemporary Navajo woman who finds that they share the same face,” says playwright Rhiana Yazzie. “At last we see modern art through the eyes and perspective of Native America, a culture, like many indigenous traditions around the world that regularly used the vocabulary of surrealism and abstracts in their art and creation stories.

“I’ve had the opportunity to recently develop Ady not only through Pangea but also at the New York Public Theater’s New Work Now! and the Playwrights’ Center’s Ruth Easton play lab,” she added.

Rhiana Yazzie is a Navajo playwright originally from Albuquerque, New Mexico.  This year Rhiana is a Playwrights’ Center Jerome Fellow for the second time since 2006. She is also a Playwrights’ Center Core Writer and has been jointly commissioned by the Ashland Oregon Shakespeare Festival and the NY Public Theater to write a play for American Revolutions: the United States History Cycle.

Rhiana’s plays have been seen on the stages of SteppingStone Theatre for Youth Development, Teatro del Pueblo, and Mixed Blood Theatre. She is also an award-winning writer of plays for radio and for youth. Her most recent Theatre for Young Audiences play produced by La Jolla Playhouse, Chile Pod, toured to 17,500 children in Southern California. Her play Ady has also been developed through the New York Public Theater’s New Work Now! and the Playwrights’ Center Ruth Easton Lab.  Her website is www.rhianayazzie.com.

Hayley Finn is the Resident Director and Lab Producer at the Playwrights’ Center where she works with some of the nation’s leading and emerging playwrights.

The Alternative Visions Festival is supported by The Playwrights’ Center, Jerome Foundation, the Smithsonian’s National Museum of the American Indian Exhibition and Publications and Expressive Arts Program made possible through a generous gift from The Ford Foundation and KFAI.

‘A Christmas Carol’ at the Guthrie