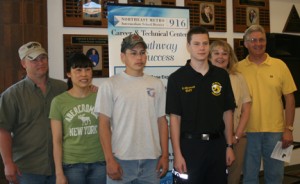 White Bear Lake, Minn. (June 11, 2010) – The two Intermediate School District 916 students from Mounds View who assisted Century College instructor Xochitl Grant after her car crashed on icy I-694 on Feb. 2 received an emotional standing ovation at an awards ceremony on May 27.

The students – Chad Maxwell of the EMT program and Logan Schmitt of the truck diesel program, both in the district’s Career and Technical Center – also were surprised to receive some thoughtful gifts. Chad received a special first-responder toolkit and Logan received a gift certificate to purchase tools. Their parents attended and were very proud.

Helping present the awards was Joel Grant, Xochitl’s husband, who said he was grateful to the boys for going out of their way to help Xochitl on that dark, freezing morning. Xochitl is paralyzed from the chest down as a result of the accident and is currently undergoing therapy at Courage Center. 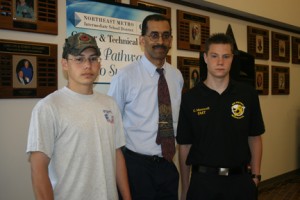 Century College instructor Muriel Stoltzman of the English for Speakers of Other Languages department reminded audience members that Chad and Logan, both seniors in high school, were driving separate cars to their 916 programs at Century when they saw Xochitl’s car in the ditch with the air bag deployed. They could have driven by, as everyone else was doing, but instead they both pulled over and stopped.

Tapping on Xochitl’s window, they could see that she was in distress, struggling to breathe and slumped over the wheel. Her car door was locked, and she was unable to open it.

Thinking fast, the boys managed to pry open the door just far enough to reach in and unlock the door. Then Logan got a knife from his car and Chad slit Grant’s seatbelt so that she could breathe more easily. Chad then climbed into the back seat and held her head between his hands, stabilizing her neck until the paramedics arrived.

Century College faculty and staff members, as well as Xochitl and Joel Grant, contributed to the gifts for the boys.