MINNEAPOLIS (June 11, 2010) – Tuyet Huong wanted to chase her dream while also keeping your feet firmly on the ground. Tuyet, like many other young women, grew up watching professional and amateur singers on television talent shows and at Vietnamese cultural performances. She enjoyed singing but hadn’t given actual performing much thought – until about five years ago when a promoter overheard her sing at the urging of her friends.

“One day I was at a party and I just found out that I had good voice,” said Tuyet. “One of the promoters was there and thought I had a good voice and it started from there.”

That promoter was Tham Nguyen, an agent with Golden Dragon Entertainment who now manages Huong. He knew Tuyet wanted to sing and started her off with spot appearances with local bands playing weddings and events.

The audience reacted well to her voice and charm and Nguyen said he began to get requests for her to sing at weddings and events. She has been a featured performer for the past two years.

“She has a nice voice and is also a nice person,” said Nguyen. “In the summertime there are a lot of weddings and other events nationally. She is really popular right now.”

Tuyet is more the girl next-door than a stage diva. She described performing as a transformation that takes on a life of its own. She is just as surprised as friends and family and doesn’t completely understand it. She tunes everything out and focuses on the song and evoking that emotion to the audience. 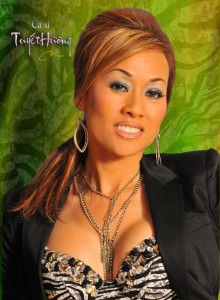 Her repertoire Vietnamese love songs mixed with contemporary American Vietnamese pop songs, are familiar favorites that she chooses based on her ability to perform them.

“I am lucky that the songs I choose have become very popular,” she added.

“I feel more comfortable singing in Vietnamese, because English is not my native tongue,” she added. “I like to sing some songs in English, but I am a little scared.”

Non-Vietnamese speaking music lovers can listen to the songs of love and loss, which she said convey the same emotions. The mood is enhanced by live production with a universal experience that can be felt without translation. Her love of fashion also helps as she painstakingly prepares her look for the show.

The rest is about stage presence and the audience reaction, and it has been good locally and at several variety show lineups in cities like Las Vegas, Portland Seattle, Houston and San Jose. She prepares songs ahead of time for the audience – young and old alike – that best match the events.

She singles mostly ballads and love songs that written by popular Vietnamese singers, including her favorite, Minh Tuyet, a California-based singer whose popularity has not diminished over two generations.

She said the Vietnamese elders really enjoy Rumba music and that traditional fan favorites are, “Sau Tim Thiep Hong (about getting a wedding invitation from someone who is marrying someone else); and “Pho Dem” (Night in the City).

Her contemporary favorites with the young crowd include, “Sao Anh Ra Di (Why are You Leaving?), a song by Minh Tuyet; and “Dancing All Night.”

“It is easy to make people love you but you have got to open up,” she said. “I get an audience to like me because of my attitude and because I honestly love my song.

When singing around the country, Tuyet said she may have a 30-minute afternoon rehearsal with band she has not met before the evening performance. A delayed flight between cities may mean going on stage without rehearsing.

She often sings three-song sets at national variety show events. It has been a joy to meet performer with the artists that she has grown to love over the years. Once in a while she can perform an impromptu duet on a song.

“In the beginning I was scared – but I love it,” she said. “It has been a true joy to travel and get to know the other singers around the country,” she said. “The bigger the audience the more fun she has on stage.”

Nguyen said Tuyet could sing fulltime if she wanted to, but that her daughter and family come first and she chooses to keep her regular jobs as a fashion saleswoman at Nordstroms and at Ly Bakery on Eat Street, Minneapolis. 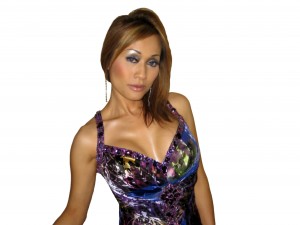 Now living in Brooklyn Park, Tuyet is a single mother of a 12 year-old daughter, Heather. They enjoy the movies together and spending time with family.

Tuyet was raised in Duluth, graduated from East High School, and studied cosmetology before moving to the Twin Cities to work as a model for Royal Spa International promotional materials for its Twin Cities franchise.

She wants to record someday, but said she isn’t in a hurry. There is plenty of time to develop songwriting partnerships with singers and musicians she meets and put together a great lineup of songs.

Another reason to wait is that she is busy and balances work, singing and motherhood – and is currently pleased with the way things just as they are.

“My family has supported me and remind me to take care of myself,” she said.

“I am very happy in what I am doing,” she added. “My goal is to be very happy singing and working. I want to thanks all of the people who have supported me; the fans, Golden Dragon Entertainment and Tham Nguyen who has been behind me giving support.”

Tuyet Huong will perform at Treasure Island Casino on July 1, 2010, 8:00 p.m. Listen to her sing online at Myspace/tuyethuong or Facebook/tuyethuong.