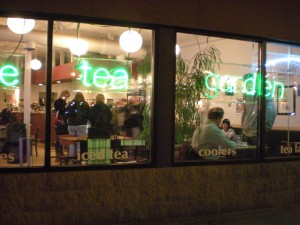 MINNEAPOLIS (June 21, 2010) – When Diana Nguyen started her first Tea Garden in the Uptown neighborhood of Hennepin Avenue in 2002, they wanted to offer a popular destination alternative to coffee shops as a bubble tea café that also offers more than 60 organic, fair-trade teas from around the world.

The Tea Garden opened its fifth location earlier this year in the Mall of America on the 3rd floor, across from Nordstroms.

Daniel Kent, spokesperson for The Tea Garden, Inc., said it is a great core of customers in the original locations that allowed the new stores to succeed.

“We are continuing to try to appeal to new types of customers,” said Kent.

The Tea Garden is designed and decorated with an open and bright décor, yet it is also cozy. All locations have consistent color, furniture and exposed high ceilings. There are also water fountains, futons, coffee tables, lanterns, and the long, open bar counters, but allowing a little variance in layout and community artwork to distinguish each location.

They said atmosphere is enhanced with patrons enjoying free WiFi and a cheerful and professional management.

“We do have a brand essence that is the same in all of our locations, but each location has its own unique qualities as well,” Kent added. “The ambiance in the St. Paul skyway is far different than, say, the ambiance in Uptown. And, sometimes we roll out certain products in some locations before we roll them out at all locations.

The MOA (Tea Garden) has exceeded all of our expectations,” he added. “It does not have the same “sit-and-hang-out” feel that our other locations have, but it is becoming a MOA favorite.”

There are now DJ weekends at Uptown, Grand, and U of M locations.

“Music and art seem to be a core part of our Tea Garden community, but much of this music and art presence has been organic,” he added. “We give much attention to what the customer wants their Tea Garden to be. We also put a high value on what our baristas think the Tea Garden should be.”

Kent said the slow economy actually helps their expansion plans with more attractive lease options as other franchise chains disappear. He said the MOA has been very helpful in helping they’re newest shop grow and succeed – and also credited the products and the employees with the success of each location.

“I think they feed off of each other,” said Kent. “To me, I view Bubble Tea as being far more fun to sell than a cup of coffee, so we attract some really great people who want to work for us and sell such a fun product.

“We also try to treat all of our employees with respect, not because of some ‘management philosophy’, but, because we actually do respect them. We hire great people who are as enthusiastic about the Tea Garden as we are. We hire people who we would like to serve us our own Bubble Tea if we were customers.”

Operating five stores is a challenge that wasn’t as big with one or two locations, and Kent said the biggest challenge is to grow wisely. It is not for the sake of potential, he added, but a careful and gradual approach that fits with their other attributes of high employee retention and trusting what they say along with the customers, baristas, and managers.

“The possibilities for The Tea Garden are wonderful,” he added, noting that they still have many goals to reach.

The inventory includes international loose leaf teas that can be served or purchased in bulk. They said health conscious customers like tea as a natural source of soluble polyphenols, or a natural antioxidant with potential health benefits. The five categories of bubble tea, smoothies and coolers are also very popular, and in part for its natural, non-dairy, low fat ingredients.

“We are continuing to create healthier and tastier drinks every day,” said Kent. “There are many great drinks, thousands, that can be made by picking a loose leaf tea, adding a flavor shot, adding some flavored jellies, maybe adding creamer or honey, and YUM!

For instance, he enjoys a Par Amour (strawberry and hibiscus tea) with a shot of yogurt and a scoop of green apple jellies. He said that with over 50 loose leaf teas, 40 flavors, and six types of jellies, “the possibilities are endless.”

“We are also experimenting with fresh, local fruit,” he added. “We are growing our Internet presence for people who love our tea but who are unable to visit our stores.”