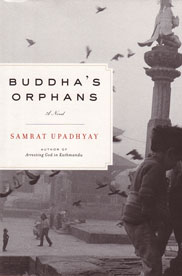 Using Nepal’s political upheavals as a backdrop to demonstrate how deep are our connections to past and home, Samrat Upadhyay, in his masterly second novel, Buddha’s Orphans, has created an engrossing, unconventional love story.

It spans half a century of Nepali history, with characters whose lives are intertwined across the generations. The book is further evidence that Upadhyay is one of our finest writers, thoroughly deserving of his acclaim as “a Buddhist Chekhov” (San Francisco Chronicle).

Raja and Nilu are destined to fall in love. They have both been abandoned – he through his mother’s suicide in a public pond, she through her mother’s constant escape into drink, Raja has grown up on the streets; Nilu in a crumbling mansion. And yet they find each other, again and again.

First when they are children, then when they are young lovers, and finally after they both fear they have lost their marriage. But the events of the past, even those we are ignorant of, inevitably haunt the present. And Raja and Nilu’s story is not only their own.

Buddha’s Orphans traces the roots of this love story and follows its growth – across time and the globe, through the loss of and search for children, and down several generations, hinting that perhaps old bends can, in fact, be righted in future branches of a family tree.

Samrat Upadhyay is the author of Arresting God in Kathmandu, which earned him a Whiting Award, The Royal Ghosts, and The Guru of Love, which was a New York Times Notable Book, a San Francisco Chronicle Best Book of the Year, and a finalist for the Kiriyama Prize. Upadhyay directs the creative writing program at Indiana University.

A Conversation with Samrat Upadhyay

Publisher: Buddha’s Orphans feels like a very different novel from your first one, The Guru of Love, in terms of both its structure and its subject matter. What motivated you to write this book?

Samrat Upadhyay: The Guru of Love had been a strictly chronological affair, with a plot structure that was linear and uncomplicated, and with three characters around which the story revolved. It was the perfect tale for a first-time novelist. But for my second novel I wanted something more challenging, something that’d use the capacity of the novel form to stretch our conventional notions of time, especially in relation to Nepali history.

In retrospect, it seems that I wanted to demonstrate that our lives are intertwined with lives from the past, that “life repeats itself,” if you will. Buddha’s Orphans covers half a century of Nepali history, with characters across generations whose lives are intertwined in inexplicable ways.

Publisher: Is Buddha’s Orphans your most complex work?

SU: It certainly felt that way when I finished writing it. This novel is the most challenging work that I’ve done, in terms of subject matter and narrative structure. The first draft was close to eight hundred pages! And I was completely exhausted by the end of it, so much so that I thought I’d not write for another year or two. It turned out I couldn’t stay away for more than a couple of months.

Publisher: The love affair between Raja and Nilu is moving and has the feel of spanning generations. Could you talk about these two protagonists?

SU: The character of Raja appeared to me well before I started writing, and the novel’s opening, showing baby Raja abandoned in the park, was also firmly entrenched in my mind months before I began. But what turned out to be truly delightful was the dominant role the character of Nilu assumed by the first quarter of the novel.

This was very much unplanned (I work without plot outlines), but to me it made the novel, and in the end the book turned out to be as much about Nilu as about Raja. This pattern of a female character exerting her influence on events had also occurred in The Guru of Love, where Goma’s challenge to her husband, Ramchandra, galvanizes the story. In Buddha’s Orphans, too, Nilu takes charge early on, and it’s her reaction to the events in her and Raja’s lives, her intuition about how Raja’s unknown past was haunting their present, including their daughter’s, that, gives the novel its power.

Publisher: The hippie period of the 1960s and 1970s in Nepal features prominently in the novel. Why did you choose those decades?

SU: Those were the years when Nepal began fully opening up to the outside world. I remember as a child walking with my mother down a popular Kathmandu street – I couldn’t have been more than five or six then – and watching two dreadlocked hippies French-kissing as they crossed the road at a snail’s pace. In a politically and culturally conservative society, that was quite a sight, and my mother was visibly embarrassed.

The government was everywhere, on the billboards in Kathmandu and on Radio Nepal, which paid homage to the king and the one-party Panchayat system, it seemed, every hour. I also remember walking with my parents and my sister, and people commenting on how our nuclear family matched the family planning slogan of those years: “We two, our two.”

Publisher: As a Nepali writer living in the West, do you feel that you have an obligation or a responsibility to tackle major issues of your home country?

SU: I don’t feel compelled to be the representative writer of my home country for the West. The major impetus for my writing is to try to tell a good story, to keep my readers engaged with my characters and the story’s happenings, and to make them feel, by the end, that they have caught glimpses into human nature. In the process, however, I do end up interrogating certain aspects of the society – for example, the image of Nepali propriety. There’s a tendency in our society to sweep under the rug all those things that we don’t want to admit exist. We blame the West for its corrupting influences on our culture, as though there’s one solid Nepali culture, pure and pristine, that we need to cling to. I use my writer’s license to peek into my characters’ bedrooms, and I discover interesting things that in public are kept under wraps. In Buddha’s Orphans, Nilu’s defiance of her male-dominated society is one way in which the novel challenges established thinking.

Publisher: There’s a short section in Buddha’s Orphans where Nilu’s daughter Ranjana spends some time in America. Does this signal a change – will you be using your adopted country more as a setting for your writing?

SU: That’s certainly possible. I am finding that I’m increasingly more interested in a kind of a cross-cultural analysis in my work, although I doubt whether I’ll end up writing a work of immigrant fiction any time soon. There’s still so much to write about Nepal that I feel that I have just begun.