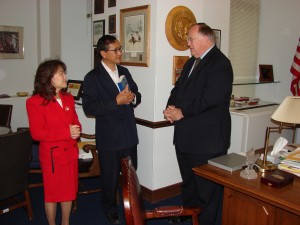 Richfield, Minn. (June 12, 2010) – The Cambodian community of Minnesota last Saturday welcomed the legendary Sam Rainsy to the Richfield Community Center. The former Cambodia Parliamentarian and President of the opposition Sam Rainsy Party has been out of the country since early 2009 on reportedly politically motivated charges.

“I received a very warm welcome and I am very happy to be here,” said Ramsey, who last came to the state in 2005.

Rainsy was at the Minnesota State Capitol Friday and in Richfield Saturday to speak on his impending return to continue his fight for democracy, transparency in government and fair elections. The events were coordinated by Eva Ng, in conjunction with the Republican Party of Minnesota, the Cambodian American Veterans of Minnesota and leaders of the Cambodian community of Minnesota.

“Mr. Sam is a revered Cambodian Parliamentarian and published author who is pro-American, pro-Democracy, and currently the front runner in the Cambodian Prime Minister’s race,” stated Ng. “Mr. Sam is well-regarded by Cambodians as their very own Nelson Mandela.”

The first stop for Sam Rainsy last Friday was the State Office Building to visit the office of Senate Minority Leader David H. Senjem (R-29), who welcomed him to Minnesota and presented a copy of the Legislative Handbook.

Rainsy said he has not been to Cambodia since early 2009 when he fled politically motivated charges that could have put him in jail for 2 to 16 years. His spouse, Tioulong Saumura, also a member of Parliament and their three grown children remain in Cambodia as he travels to Cambodian communities around the world to draw attention to what he describes as a rapidly eroding democracy now being run by a small elite.

Cambodian Prime Minister Hun Sen and his ruling party is actively preventing him from returning to take part in the next General Election in 2013, or to influence the local elections scheduled for 2012, said Rainsy, who is trying to build international pressure to force Hun Sen to drop what he called trumped up charge against him.

“They use the judiciary as a political tool to crack down on my party and me,” he said. “But this is a trick and I have gone through similar problems many times in the past.”

Rainsy will return to certain danger but said he must work to bring the rule of law and to implement a truly democratic system. He said the current regime presents a façade of democracy without substance.

“Even worse, it is a perversion of democracy,” he added, describing a rubber stamp parliament, sham elections, and a judiciary that ensures impunity for rulers involved in crimes by cracking down on the minority.

He said this goes on while Cambodia continues faltering as one of the poorest and most corrupt nations in the world. He said the evidence is the lack of progress despite a half century of massive international assistance.

The country of mostly rural farmers are being forced off their fields, he said, by government supported land grabbing deals that sell to private interests engaged in land speculation. At the same time, he said the government is pushing legitimate investors and jobs away to neighboring countries – causing high unemployment and the social problems that follow with a “time bomb” of violence and unrest.

The situation is becoming more and more tense, he added. Rather than alleviating poverty the government is aggravating the problem. He said there is an immediate need for fair and transparent elections, and a free media that is accessible to the minority party.

“There is not a level playing field to allow opposing views,” he said, noting that journalists and union leaders who question the status quo in an atmosphere of fear are sometime jailed and even killed.

“They are not allowed to protest or demonstrate,” he said. “There is no opportunity to go in depth and understand the situation in Cambodia.” 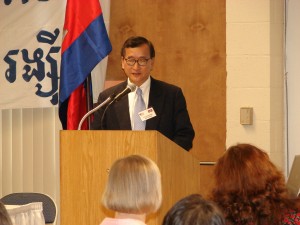 Rainsy is also displeased with the Khmer Rouge trials that he said are “going no where.”

At least 1.7 million people are believed to have died during the period of Democratic Kampuchea, which lasted from April 1975 to January 1979. The Extraordinary Chambers in the Courts of Cambodia is tasked with trying senior Khmer Rouge figures and others responsible for the worst atrocities committed during that period.

The United Nations said that since 2006 the Khmer Rouge Trial Chamber has made progress with hearings and with conducting complex international criminal trials to international standards. It expects to issue a July verdict against Kaing Guek Eav, alias “Duch,” the secretary of the notorious S-21 security centre.  It also expects to issue closing orders, or an indictment against four other Khmer Rouge leaders, Nuon Chea, Ieng Sary, Ieng Thirith and Khieu Samphan.

The UN is also calling for funding to make up for a $21 million shortfall for 2010 not including future staff salaries and entitlements. The 2011 budget of $46.8 million would include $1.1 million already pledged by the Cambodian Government for the national component.

Rainsy complains that too many former high ranking Khmer Rough leaders are still in power and do not want to see the trials succeed past a few celebrated cases. He said that Cambodia would have preferred “a Nuremberg” style tribunal and that former Khmer rouge would not be implicated unless it was an independent tribunal.

He said that no one could speak out at the time of the Khmer Rouge, and current leaders are now in a unique situation to block trials and at the same time benefit from tribunal funding.

Born in Phnom Penh in 1949, Rainsy’s father was Sam Sary, a Deputy Prime Minister of the Prince Norodom Sihanouk Government. His mother, In Em, was the first Cambodian woman to become a licensed teacher.

As a boy Rainsy was schooled in Phnom Penh, Paris and London. He attended universities in France, earning degrees in Political Science, Business Administration, Accounting and Economics.

Rainsy said a lot has changed since he was in Minnesota just five years ago. He said things are worse in Cambodia but that he is pleased to see growing and vibrant expatriate Khmer communities in Minnesota and around the Untied States.

He said that it is important for Cambodian Americans to hold meetings and networking events and to educate more Americans about the need to support minority groups in Cambodia that are fighting to bring about democratic change.

He encourages Americans to petition elected leaders to pressure the Cambodian government to abide by democratic principals and respect human rights.

In 2007, members of the Minnesota Cambodian community were at the State Capitol to protest what they called the Vietnamization of the border areas at the expense of the ethnic Khmer-Krom groups of Cambodia that were uprooted and forced out.

The timing of the event was prompted by the mysterious death of the Venerable Eang Sok Thoeun, a 32 Khmer Krom Buddhist monk on the border area Kandal Province, Cambodia.

The group also continued the work of the Cambodia Border Committee that has kept close watch on the dissolution of the 1993 Constitution, and the deterioration of Cambodia’s sea and land borders as defined by the 1991 Paris Peace Agreement – based on the Geneva Conference of 1954 and the Vienna Conferences of 1967 and 1969, which voided treaties and agreements imposed during the Vietnam occupation era.

After Vietnam invaded Cambodia in 1978, the group claims that pressure on the Cambodian government led to significant concessions of natural resources and territories. The Paris Peace Agreement prohibited the validation of the treaties and agreements made during that period and expatriate Cambodians are attempting to come to the aid of their homeland that they feel is in danger.

Since 2000 Chapters worldwide have since worked as an expatriate voice to bring international pressure on the Cambodian government. Cambodian King Norodom Sihanouk, retired in 2004 for health, and his son King Norodom Sihamoni, have dedicated time to the border issues after complaining of a lack of cooperation from the prime minister.

The Supreme National Council on Border Affairs, an organization founded with members of Cambodia’s three major parties, CPP, FUNCIPEC and Sam Rainsy, produced evidence of border changes by comparing maps of the 1960s through the present.

He and other party members began to speak of corruption and questionable parliamentary procedures and fled the country under charges of defamation in 2005. Rainsy was tried in absentia despite international protest that viewed the matter as silencing opposition, and was sentenced to fines and 18 months in prison. He received a Royal Pardon from King Norodom Sihamoni in 2006 and returned to Cambodia.

In 2009 Rainsy lost his immunity again after the government was reportedly upset over his visits to the Vietnam border area to participate in re-staking border markers to original locations with area residents that now saw their homes on the Vietnam side. Rainsy fled again and a warrant for his prosecution was issued.

He has been speaking about Cambodian injustices around the world until now and plans to return to Cambodia soon. 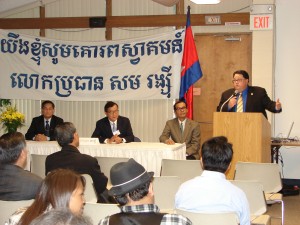 GOP Chairman Tony Sutton, a party member since age 17, also owns several of the Baja Sol restaurants in the area.

“I decided to run for party chair last year because I thought the party needed to change and to reach out beyond our traditional base,” said Sutton. “That is part of the reason why we are participating today in this event with the Cambodian community and Sam Rainsy’s visit.

We want to reach out to folks that we think we have a lot of shared values with, and maybe we just haven’t done a good job of that in the past and we want to change that,” he added.

Sutton was an intern with former U.S. Senator Rudy Boswich (R-MN) in 1987, and helped to organize a team that went to the Thai refugee camps to prepare the state for a large number of Hmong coming to Minnesota.

It was appropriate to help people make the adjustment, said Sutton, as they fought for America and were then oppressed for that connection. Now, in the United States, he said this community is helping make Minnesota a better place to live.

He said immigrants and refugees come to DFL dominated urban areas. He said these groups espouse family-oriented, hardworking and entrepreneurial values of the Republicans and they need to work harder to bring them into the party.