Garza and dozens of women in bridal gowns marched in the rain from Our Lady of Guadalupe Church on St. Paul’s West Side to the State Capitol. Outgoing St. Paul Police Chief John Harrington and the new chief, Thomas Smith, marched in the parade along with Ramsey County Sheriff Bob Fletcher and Paul Schnell, who was just named chief of police in Hastings. The marchers chanted “stop the silence.”

Garza, a domestic abuse survivor, put her heart and soul into the planning to raise awareness of the issue and encourage women to call police if they are threatened. A news story about a New Jersey woman who was killed by her jealous ex-boyfriend while she was wearing her wedding dress prompted Garza to start planning the event.

In the Capitol Rotunda, Robyn Robinson, the former Channel 9 anchor who is running for lieutenant governor with Matt Entenza, emceed a discussion about domestic violence. Chief Harrington told the crowd that when he first became a police officer, he was shocked by how often officers find themselves in the middle of domestic abuse situations.

Harrington said his department’s number one mission has been to reduce domestic violence. Under his leadership, domestic violence cases have decreased from 15,000 cases to 9,000 cases per year. “It is amazing how many women suffer in silence,” said Harrington. “It is time for action that makes it clear to the general community that this scourge must end.” 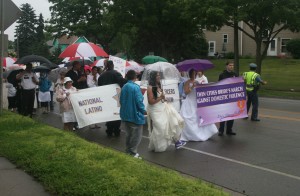 Century College law enforcement students Nong Xiong of St. Paul, Kousou Yang of St. Paul, True Xiong of South St. Paul, Ben Anderson of North Branch, and Johnny Pegee of Oakdale joined Garza in the march. Garza’s plan is to become a police officer who is able to combat this issue on the front lines.