ST. PAUL (June 1, 2010) – U.S. Ambassador to Laos, Ravic Huso was in St. Paul last week to discuss ongoing issues affecting the more than 4,500 Hmong who were forcibly repatriated from Thailand to Laos in December 2009. Huso updated several hundred in attendance at Metropolitan State University Auditorium on the progress of Laos on many fronts as well as the Hmong repatriation issues that have relatives and community concerned in Minnesota.

The event was co-hosted by U.S. Senator Al Franken and the office of Congresswoman Betty McCollum, and also present were State Senator Mee Moua and State Rep. Cy Thao. Franken responded to the repatriation in January, with a public information gathering forum after his office received concerned calls from community with information they reportedly received indirectly from relatives in Laos.

At the time, Franken said U.S. and Laos government sources reported that people were being treated well, and have enough food, water and clothing. His present concerns are that Laos improve accountability and transparency and allow U.S. and international groups access to the repatriated Hmong. He also demanded that Laos allow humanitarian aid to be sent directly to the two villages where the repatriated Hmong now live.

“What happened with the Hmong in this repatriation shows a troubling erosion of refugee protections in Southeast Asia,” said Franken, who said he is planning a trip to Laos soon, and wants to send a message that the U.S. Senate is watching and cares what happens to these people.

Of the approximately 4,000 repatriated Hmong, there are 158 that were identified as “persons of interest” – that reportedly fled Laos for fear of the government – and may be eligible for refugee status. Most of this special group are with the other returnees, however, he added that a few are at other locations around Laos.

He added that cell phone calls and other sources indicate with some certainty the location of these Hmong. 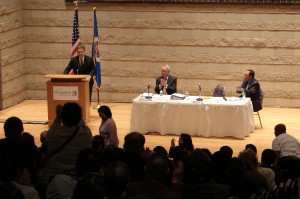 The village of Ban Pha Lak in southwest Kasi district in Vientiane province was built in 2007 to handle a group of voluntarily repatriated Hmong. It is now a permanent site with dwellings, farmland and an irrigation system for farming rice.

He said a second site was built recently to accommodate the forcefully repatriated Hmong in the village of Phonkham of Borikhamxay province. He said it is the larger of the two with 601 tin-roofed, dirt floor dwellings that is designed as a permanent site with infrastructure and irrigation systems.

Huso said that both sites have running water, electricity, and even cell phone coverage. The pressing concerns are the lack of a school and that hundreds of children are not being educated. There is also inadequate healthcare with a facility designed to serve only a few hundred people.

“I think that it is very important to the United States to consider how we can help people resettle there, and pursue normal lives, and generate income for themselves and their families, and to enjoy a life like anyone else in Laos,” said Huso. “They are going to need assistance because they didn’t have anything before, and they were sent back and certainly came back with nothing but their immediate possessions.”

Huso said the real help would come in the form of long term development assistance and not just caring for the immediate needs of food and shelter. The first step is to improve the living conditions from starting again in an undeveloped area and move beyond subsistence living.

The last time that a large number of Hmong refugees were allowed to be sponsored by family to the United States was in 2005. The State Department said there would not be another, but at the time Thailand had agreed to take the remaining Hmong.

Huso said the issue now is for Laos to allow access to the repatriated Hmong by outside entities, and to create a situation where they can request to leave, or have the same rights and opportunities granted all Laos citizens.

He said that the Lao government said the Hmong would be granted those, but that most have yet to be presented with a national identity card, household registration cards and passports for travel – which is essential for mobility and opportunity in Laos.

Speaking about Laos in general, Huso said that overall the Laos and U.S. relations are moving in the right direction and in this 50th year of official relations he encourages more programs to help encourage this movement forward. He said the relationship evolves not only by “resolving legacies of the past, but by advancing of future opportunities.”

Huso said the Laos economy has rapidly modernized over the past decade but that it is in the context of the poorer and more recent members of the Association of South East Asian Nations.

Huso said great disparities between different groups and poverty is the norm away from the cities. He said two-thirds of homes are still without electricity and around half still lack access to safe water. There is a high infant mortality, low literacy and low life expectancy.             The greatest strength is in this new generation that was born after 1975, he added. They along with the government now embrace the idea of free enterprise, the rule of law and are increasingly exposed to outside political and economic practices and standards.

He said Laos does not censor or block Thai television and radio, and do not block content to the few people that do have access to the Internet.

“The U.S. strategic goal in Laos is to see a country at peace internally, and integrated into ASEAN and Southeast Asia and into the world economy, while not being controlled or dominated by its more powerful neighbors,” said Huso.

“Our objectives are to continue reform based on open markets with the Lao economy, and see the government more open and respectful to the rights of its citizens and to broaden its base of the relationship,” he added.

He spoke specifically of State Department initiatives to address the disparities among the newer ASEAN members, Laos, Cambodia and Vietnam, with the traditional longer standing members such as Thailand, Malaysia, Singapore and Indonesia.

The initiatives he said have since started a comprehensive dialogue on bilateral defense which has opened a U.S. Defense Attache office in Laos. He said this office encourages the Lao military to play more a positive role in society and in the sub regions.

Other ongoing issues have led to identifying more than 200 of the nearly 600 Americans Missing In Action from the War in Southeast Asia. They are also providing education and assistance regarding the awareness and removal of unexploded American ordnance from the war.

Other issues are with providing alternative opportunities for farmers to fight production of opium; health education and awareness of HIV/AIDS; and in combating trafficking of people, narcotics and wildlife.

Huso said there is concern that the government is a one-party state without opposition parties. He is encouraged to see a more pragmatic and reform-minded government that since 1999 has formally allowed associations to form. The government is now involved in all the politics of preparing for its next Nine Party Congress.

“I firmly believe that engagement with the Lao people and the Lao government is the right choice,” said Huso. “I think that by working together we can help foster conditions and see Laos become a more prosperous country; more respectful of the rights of its people, friendly with its neighbors, actively participating in international affairs and more fully engaged in trading and commerce with the world.”

Ambassador Huso was appointed Ambassador to Laos on June 22, 2007, and said his three year assignment would be completed this summer. Huso said that this is his second visit to inform and to listen with Hmong and Lao American communities in Wisconsin, Minnesota and California.

Huso lived in Laos as a boy in the 1960s when his father was stationed there to work for USAID. He is a lifelong diplomat, having served in various posts in Washington, Africa and Asia, including Malaysia and as Director for Asian Affairs at the National Security Council, and State Department Deputy Director and Director for Burma, Cambodia, Laos, Thailand, and Vietnam Affairs.

Prior to serving in Laos, Huso served as Foreign Policy Advisor to the U.S. Pacific Command in Honolulu, and as Deputy Chief of Mission at the U.S. Embassy in Bangkok.

Leave a Reply to to go travel Cancel reply