By Tom LaVenture
BLOOMINGTON, Minn. (November 1, 2006) – Kristi Yamaguchi, the Olympic Gold Medal figure skater, was at the Mall of America last Wednesday, to accompany the American Lung Association’s, “Faces of Influenza” Portrait Gallery, in an effort to encourage people to get their annual flu vaccinations to protect the health of their families.
Yamaguchi partnered with the American Lung Association of Minnesota (ALAMN) to help raise awareness about influenza and the importance of immunizations.
“When a good cause comes along and I feel its something I believe in, then I like to try to get involved if I can,” she said. “When they approached me with this campaign it made so much sense to me.”
Influenza immunization rates fall far short every year, even though more than 200 million people that are considered especially “at-risk” for flu and recommended to receive the influenza vaccine annually. Yamaguchi said that if everyone who needed to be vaccinated went out and got their flu shot, then it would go far to prevent a serious outbreak of the flu.
“I have gotten a flu shot probably for the past 15 years, so I really believe in it,” said Yamaguchi.  “I was kind of shocked at the numbers that (ALAMN) told me of the people who don’t get the shots and who should.”
Yamaguchi and spouse, Bret Hedican, a St. Paul native who now plays for the Carolina Hurricanes, live in Raleigh, and have two daughters, Keara Kiyomi, 3, and Emma Yoshiko, who will turn one on Nov. 16. She continues to get the vaccination to protect her vulnerable children and spouse from the flu.
“People just don’t realize when they fall in to a high risk category,” she said. “So I was really happy to get involved, and now as a mom I realize how important it is to help protect your family and kids.”
October and November is the best time to get the flu shot at the start of the flu season. It is still a good idea to get shots up to December or January, and protect yourself and others from the flu as the season extends into March and April.
The Faces of Influenza traveling exhibit and booklet is part of an American Lung Association educational initiative that is meant to “Put A Face” on a serious disease. The gallery exhibit was accompanied by an Influenza vaccine clinic.
“A couple of families involved in the campaign have lost young children to influenza,” said Yamaguchi. “You never think about how vulnerable they really are. My kids have their appointment next Thursday to go get their flu shot. It’s something so simple and preventable that you can do.”
The couples that she mentioned include Richard and Alissa Kanowitz, who lost their daughter Amanda, age 4, to influenza related complications in 2004. They started a foundation (www.amandakfoundation.org) to support work to identify at-risk kids.
Christina Fry and Rick Cerett had twin daughters, Chalise and Marques. They lost Marques at 6 months old to influenza. It began with what they thought was a cold and within a few weeks she was gone.
The book illustrates the impact of prevention information and awareness with Lylan Bui, the 18-month-old daughter of Tri and Trinh Bui, a pharmacist who made sure that Lylan received her vaccination as soon as she reached six months old, followed by a necessary second dose a month later.
Jessica Polakow was an expectant mother at the time of the portrait. This put her and her unborn baby at-risk and she got the vaccination.
Some people may think the vaccine will make them sick or put others at risk. Yamaguchi said her own husband believed that the shot would make him even more sick with the flu.
“But you can’t get sick from the flu shot,” she added. “The vaccine is a ‘killed virus’ and will really help prevent you from getting the terrible symptoms that the flu can give you.”
Other prevention includes frequent hand-washing, covering the mouth and nose when sneezing or coughing, and avoiding public places when feeling ill. 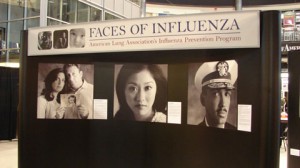 Kristin L. Nichol, MD, MPH, MBA, Chief of Medicine at the VA Medical Center in Minneapolis and Professor of Medicine at the University of Minnesota, said that “seasonal influenza,” is the phrase now used to differentiate the annual flu from bird flu and other pandemic influenza.
The seasonal flu effects from 5 to 20 percent of the population annually. The upper respiratory illness can devastate an individual’s health and spread rapidly. It is often mistaken for symptoms of the common cold.
“With typical influenza, we think of the quick onset of fever, sore throat, coughs, muscle aches, fatigue, that can last for five to six days and sometimes longer,” said Nichol. “It is very efficiently and effectively spread from droplets and aerosol from coughing and sneezing.”
Dr. Nichol said that people at higher risk for serious complications of influenza that might cause hospitalization or death, are the elderly, people under 65 with chronic medical conditions such as diabetes, lung or heart disease, young children, pregnant women, residents in long-term healthcare facilities or nursing homes, or children and adolescents receiving aspirin therapy (who are at special risk for ryes syndrome).
People ages 50 to 64 often exhibit at least one high risk category and should not think of age as the primary factor alone. Anyone who lives in a household with a high-risk person should be vaccinated. Small business owners, educators, health care workers and other people who work in frequent contact with others should also be vaccinated.
“In years when sufficient vaccine is available, then everyone is encouraged older than six months,” she added.
Robert J. Moffett, director of Communications, ALAMN (www.alamn.org), said health researchers are always looking at the new mutations that occur when different influenza strands meet, or after interacting with vaccinations. The influenza vaccine this year is not the same shot as last year, and most likely will not be used again next year.
“The goal is to get the message out there,” said Peggy Drenckhahn, executive director, ALAMN. “We want to encourage Minnesotans to get their influenza vaccinations now that the flu season is upon us.”