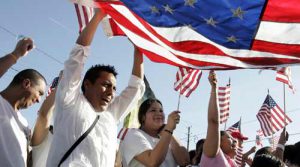 San Francisco (May 11, 2017) — Immigrant rights advocates say that despite the cloud of fear hanging over communities in the first 100 days of the Trump administration, there is also a growing and increasingly organized resistance.

“We are seeing an increase in the number of people apprehended for removal,” Melissa Chua, immigration director of the International Rescue Committee (IRC), told reporters on a national press call organized by New America Media and Ready California. “It’s not just growing infrastructure [for future deportations]…we’re seeing it in reality.”