For many in the Twin Cities Asian American immigrant community, coming to Minnesota is part of the American Dream.

That was the case for Loddy Tolzmann, the daughter of immigrants from Laos, who moved to Chanhassen in 1980. Her family came to the Minnesota to escape the remnants of the Vietnam War.

The Laotian American had a typical happy American childhood, participating in track and basketball in high school and hanging out with lots of friends. But while attending law school, she began to learn more and more about the troubles in her homeland.

University of St. Thomas law professor Virgil Wiebe educated her about landmines and cluster munitions that litter the ground in dozens of countries throughout the world. Tolzmann says she was troubled to learn this contamination has not only cost innocent people their lives, but crippled development.

Moved by the situation Tolzmann knew that she wanted to get involved. She became a supporter of the Mines Advisory Group, or “MAG” as it’s commonly known.  She is one of two Minnesotans appointed to the international organization’s board. 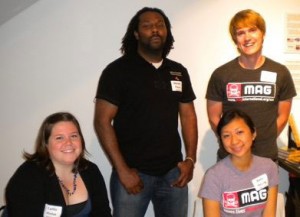 There are also dozens of other Minnesotans who have joined the cause to end the devastation. In fact, four percent of MAG supporters hail from the land of 10,000 lakes.

Tolzmann still has family members in Laos, so the effort to get munitions removed is a personal crusade.  “When I saw the effect of how unexploded ordinances impact my relatives back home, becoming involved wasn’t a question.  It was a moral obligation.”

MAG has a goal to rid the world of munitions and landmines in hard-hit nations.  Many of these devices are explosive and laid on or below the ground with the intention of killing or injuring victims when activated. In many countries, landmines cause daily danger to innocent communities.

“While people such as myself have been fortunate to immigrate to the United States, others haven’t been and they must live every day with the threat and fear,” said Tolzmann.

Patricia Loria, Marketing Director of MAG said that Laos, Vietnam and Cambodia are the most contaminated with unexploded ordnance.

“These countries have many large and small bombs leftover from the Vietnam conflict,” Loria said. “This is particularly tragic because this contamination has been there for more than 40 years.”

MAG responds to the urgent needs to residents of war-torn areas by providing safe access to water, shelter, food and emergency aid. They also provide life-saving information to those most at-risk.

The group premiered a video in Washington, D.C. last month to show Americans the agony of victims.

“We wanted to shoot a film that would really allow Americans to connect emotionally with the victims living in those countries,” Loria said.

The film follows a family in Laos whose father lost his sight in an accident right outside his childhood home. With no welfare system in Laos, viewers can watch the fear and despair of the family.

Loria says there are thousands of similar sad stories like this throughout the globe.

“Every story is tragic and preventable,” she said. “The remnants of conflict kill and injure an estimated 20,000 people every year, that’s one person every twenty minutes.”

Tolzmann wishes more Asian Americans would get involved with MAG.

“Regardless of what country you are from or what political and historical viewpoints you think, MAG is a non-governmental and non-partisan organization.  I think we can all agree that war has a devastating impact in these environments.”