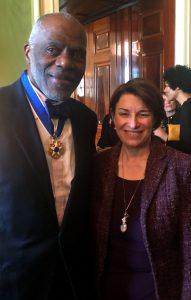 Justice Page is an accomplished jurist, athlete, and philanthropist from Minnesota, Klobuchar said. After over a decade of practicing law, he won a seat on the Minnesota Supreme Court in 1992, where he served for more than 20 years. Before he became a lawyer, Justice Page played in the NFL for 15 years with the Minnesota Vikings and the Chicago Bears; he earned his law degree and practiced law during the off-seasons. In 1988, Justice Page founded the Page Education Foundation, which has provided scholarships to nearly 7,000 students, she said.

“During his extraordinary life, Justice Alan Page broke barriers in law school, in the NFL, and on the Minnesota Supreme Court,” Klobuchar said. “On the field, he led the Vikings to the Super Bowl and ushered in the golden age of Minnesota football. On the bench, he was a thoughtful and well-reasoned judge that brought quiet leadership to our justice system. And for over three decades, he and his beloved late wife Diane have been dedicated philanthropists, providing opportunities to thousands of young people through education. This Medal of Freedom is very well-deserved.”

The Presidential Medal of Freedom is the nation’s highest civilian honor and is awarded by the President to individuals who have made especially meritorious contributions to the security or national interests of the United States, to world peace, or to cultural or other significant public or private endeavors.

“A College Football Hall of Famer, Alan helped Notre Dame secure the National Championship in 1966. He went on to have a 15-year NFL career with the Minnesota Vikings and the Chicago Bears.  He became the first — and one of the only — defensive players to earn the league’s MVP award.  That happens very, very seldom.

“While Alan was still playing for the Vikings, he went to law school and earned a law degree from the University of Minnesota Law School. In 1993, he became the first African American Justice on the Minnesota Supreme Court, where he served for more than two decades.  That’s very impressive.  What do you think?  That’s a very impressive job.  Really, it is.  Thank you, Alan.

“Alan and his wife Diane founded the Page Education Foundation, which has provided nearly 7,000 scholarships to civic-minded students. Sadly, one month ago, Diane passed away after a heroic struggle with cancer.  Said to be a great woman.  Alan, we know that the goodness, grace, and hope that Diane brought into our world will live on for many generations to come.  She is looking down on you right now and she is so proud with love.  She is so proud of you.