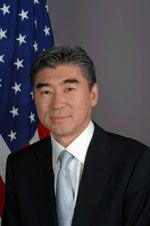 WASHINGTON, D.C. (June 24, 2011) – The White House Office of the Press Secretary reported last week that President Barack Obama has announced his intent to nominate Sung Y. Kim as United States Ambassador to the Republic of Korea.

“It gives me great confidence that such dedicated and capable individuals have agreed to join this Administration to serve the American people,” said President Obama of Kim and other nominees. “I look forward to working with them in the months and years to come.”

Sung Kim, a career member of the Senior Foreign Service, class of Counselor, became the Special Envoy for the Six-Party Talks in July 2008 and was accorded the rank of Ambassador following confirmation by the United States Senate. Previously, Sung headed the Office of Korean Affairs.

A career Foreign Service Officer, Ambassador Kim headed the Office of Korean Affairs from 2006 to 2008. Previously, he was the Political-Military Unit Chief at the U.S. Embassy in Seoul from 2002 to 2006.

From 1999 to 2002, Ambassador Kim served as a Political Officer in Tokyo. Other overseas assignments include Kuala Lumpur and Hong Kong. In Washington, Ambassador Kim worked in the Office of Chinese Affairs and served as Staff Assistant in the Bureau of East Asian and Pacific Affairs.

Prior to joining the Foreign Service, Ambassador Kim worked as a public prosecutor in the Los Angeles District Attorney’s office. He earned his B.A. from the University of Pennsylvania and received a J.D. from Loyola University Law School as well as an LL.M. from the London School of Economics.