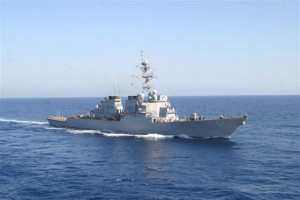 U.S. Navy photo of the USS Arleigh Burke, the first in the class of destroyers that will add the USS Daniel Inouye (DDG 118) in the future. (US Navy Photo)

“As secretary of the Navy it is my privilege to name these ships to honor a respected naval leader and a true American hero.”  Mabus said. “For decades to come, the future USS Paul Ignatius and USS Daniel Inouye will represent the United States and enable the building of partnerships and projection of power around the world.”

Inouye was awarded the Medal of Honor for his actions in Tuscany, Italy, during World War II and later became the first Japanese American to serve in the U.S. Congress and as a U.S. Senator, representing the State of Hawaii. He passed away in office on Dec. 17, 2012 as the highest serving Asian American ever in the United States Government.

USS Paul Ignatius and USS Daniel Inouye will be the first naval ships to bear these names.

Arleigh Burke-class destroyers conduct a variety of operations from peacetime presence and crisis management to sea control and power projection.  They are capable of fighting air, surface and subsurface battles simultaneously and contain a myriad of offensive and defensive weapons designed to support maritime warfare.

DDG 117 and DDG 118 are part of the DDG 51 multiyear procurement with the contract award to the building yard pending.  The ships will be 509 feet long, have a beam length of 59 feet and be capable of operating at speeds in excess of 30 knots.