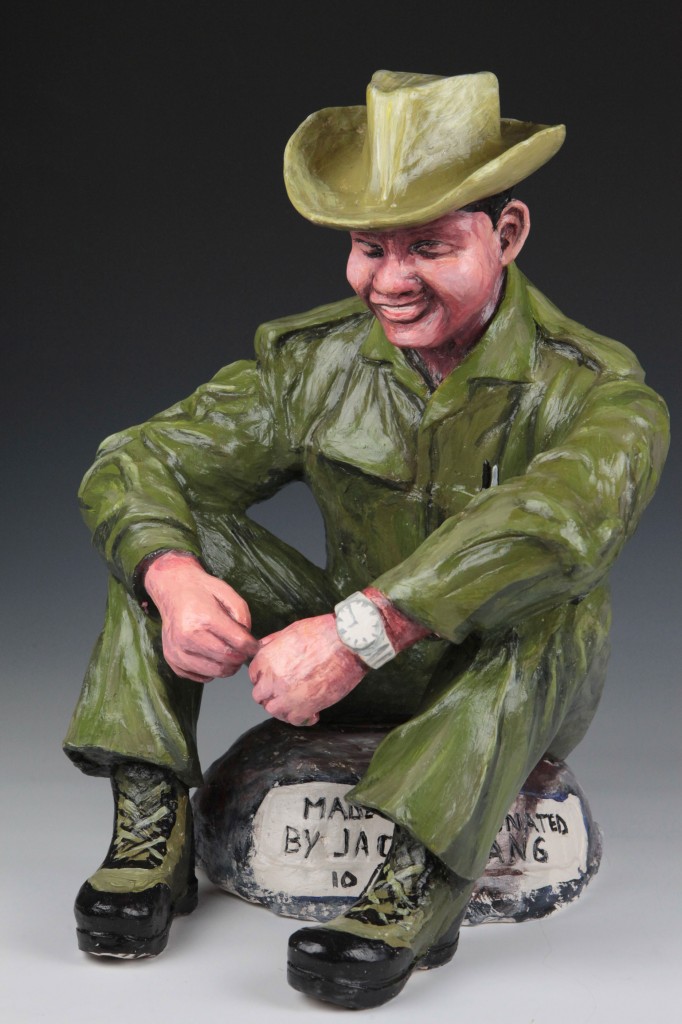 INVER GROVE HEIGHTS, Minn. (Nov 12, 2013) — When I enter the ceramics room in the Fine Arts building at Inver Hills Community College, a three-foot high sculpture of a warrior takes shape before my eyes.

Jackie Yang, a second year art student at Inver Hills, shaves pieces of leather-hard clay off the warrior’s headdress, working quickly.  He illuminates that the figure in warriors garb is the first Hmong King, a mythological Chi You, when the Hmong resided in China over 200 years ago.  He adds that the likeness of Chi You is also currently the logo for the Hmong College Prep Academy in Saint Paul.

Yang’s version, from a headdress crowning the head with tigers teeth to the flowing leopard-skin stole and all the way to the sandals, every square inch of the figure reveals the minute details and complicated lines that create movement.  The warrior stands as if he is on a mountain, wind whipping around the suggested folds of fabric.  The fluidity of the robe is mesmerizing.

He is enjoying the company of another student, a senior American Vietnam Veteran, Jim, who is also taking a ceramics course and often working in the studio together.  I notice and comment on the vibrant colors on an earlier sculpture Yang completed in the room.  Jim jests, “He’s been accused of painting his sculptures.”

Jackie is a skilled painter, and was extremely prolific in his first two semesters.  His work includes a twelve foot painting of a Minnesota landscape that still hangs in the Fine Arts atrium and a mural in the Heritage Hall building on the other end of campus.  It was a service learning project coordinated with the IHCC Emergency Medical Services.

Working as the gallery coordinator at Inver Hills, I like to display new completed work, and even take student sculptures still warm from the kiln directly to the Fine Arts atrium.  Over the past semester, I have noticed that Yang seems to be averaging a new sculpture every week.  Each piece is more complicated than the last, and each piece uses different finishing techniques.  Like his classmates and instructors, I am astounded by how prolific he is, no matter what the medium.

I asked Jackie how he decides on his subject matter, and how his art relates to his life.  He explains that his choices are deeply tied to his homeland, his values, and his outlook on life.  During an hour long conversation, he shares the origins of his imagery and memories.

A Hmong refugee, Yang came to St. Paul in 2005, after living first in Rochester, Minnesota.  He received his GED in 2011 from the Adult Learning Center in Roseville, Minnesota, where he had an opportunity to work on a mural celebrating multiculturalism.  He decided then to pursue an education in art.  Inver Hills, he admits, was not his first choice: his sights were set on the Minneapolis College of Art and Design, the Twin Cities’ premier art school.  Even with the support of his instructors and a Hmong community leader, however, Yang realized that attending MCAD was out of his reach financially.   After some research, he determined that the art program at Inver Hills Community College was a readily available, affordable option.  He began taking courses in the spring of 2012, and is now a semester away from acquiring an Associates of Fine Arts degree.

A degree in Fine Arts is just one of Yang’s many achievements over a lifetime marked by incredible accomplishments and equally incredible obstacles.  Born in Laos in 1962, Yang grew up amidst the chaos and tragedy of the Vietnam War.  His father died before he was born, which, says Yang, had a huge impact on his mental well being.  He still cries when he thinks about his life in Laos.  His family’s village, near vital war supply routes, was bombed frequently.  Yang remembers his mother taking him out of their home and fleeing to the jungle each evening, and returning during the day.

Because Laos was a battlefield for both Communist troops and US and South Vietnamese forces, Yang’s formative years were riddled with fear.  Neutrality was impossible: the Hmong people living in Laos were forced to choose alliances.  Families were separated as family members took different sides.  A mother siding with the Vietnamese would be separated from children who sided with the Americans.  After the war, a reunion might prove impossible.  The fighting made frequent evacuations necessary.  Injured neighbors and family members, unable to move with the rest of the group, might be killed and left behind.

Yang stops working on his sculpture momentarily and reflects on the past, heartbroken: “If you are looking for a movie – it’s something.  But in the real world, it is sad.” 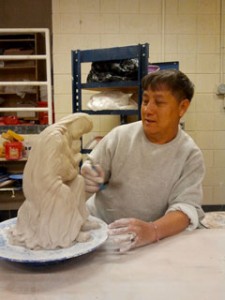 Jackie Yang works in the studio on a ceramic sculpture of the Mary, the Mother of Jesus. (Photo by Erin Goedtel)

In 1968, Jackie and his family were taken away from their village in an American H46 helicopter for resettlement in a refugee camp.  What he remembers most vividly as the helicopter left was seeing his two dogs looking up at him, left behind because the pilots did not want to carry anything other than people.  “It was very terrible to leave the village,” says Yang, who says that in his new home, the air raids were like fireworks.  With no jungle to flee to, each day was taken as it came.

Between 1975 and 1980, Jackie began making images.  There were scarcely any art resources available to him.  “There were no photos, no camera,” says Yang.  “No car, no road, no city.  A camera?  Didn’t even think about it.”  Jackie began making art in a refugee camp, where an international organization provided the materials allowing him to draw and paint.  During his time at the camp, he worked at a hospital.  There, he put his art skills to use making instructional posters for his fellow refugees.  He describes creating posters that taught refugees how to keep food clean, how to preserve food, and how to keep the mosquito population down.  Says Yang, “We did what we could to help keep the camp healthy.”

The Christian Medical Team worked with the refugees, and Jackie was one of the few refugees educated enough to work with the teams as a social worker.  The Catholic Office for Relief and Refugee also hired him to work with community development. He would find out if refugees were prepared to move to another country such as the United States and he would encourage them to study English.

Because Thailand controlled Laos before French Colonialism, Jackie and his family decided in 1980 to make the long journey to Thailand.  As they advanced closer to the border, the trip became increasingly dangerous.  Deaths became common.  After the Vietnam war ended, Yang explains, there was very little help or support for Hmong refugees.

He eventually made it to Thailand, where he remained for 25 years, hoping to return to his home in Laos.  In 1984, with the collapse of the Soviet Union, Yang, like many people in Southeast Asia, believed that democratic change might at last come to Laos.  Yet, watching the struggle from his new home in Thailand, Yang was disheartened.  The exodus from Laos continued.  Disease was rampant, and there were natural disasters.  Jackie realized that returning to Laos was not possible. 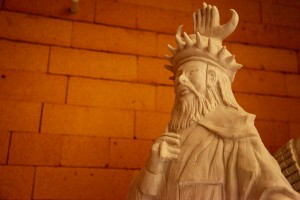 In 2005, Jackie and his wife, like so many other refugees, moved to the United States. Life now, he says, is good, “the best it’s ever been.”  He draws attention to refugees in similar circumstances. “Some are in France, and in other countries,” he says.   “There are Hmong in China, still suffering.”  America, he says, offers the best quality of life for a Hmong refugee.

In his first two semesters at Inver Hills Community College, Jackie Yang took painting classes.  Yang’s paintings depict both his Laotian homeland and his adopted home in Minnesota, but always separately, never together in a single painting.  He moves back and forth from painting Minnesota landscapes and the dramatic changes of season, to painting the remembered landscapes, villages, mountains and waterfalls of Laos.  He expends equal amounts of energy and attention to painting each location, never using source materials but, instead, passionately assembling his own memories and feelings into an artwork.  He wants to show in his paintings everything he remembers about a place or a person, and, as he paints, he takes into account his perceptions and imagination to give a personal account to each piece.

This semester, Yang is taking a ceramics class. Among his recent projects is a foot-and-a-half tall figure of General Vang Pao, a General in the Royal Lao Army.  General Vang, who died in 2011, remains highly regarded in the Hmong community.  Yang says respectfully, “He was a great leader, he fought a good fight. He was a committed leader.”

An incredible reverence, as well as an aura of mystique, continues to surround the General.  Yang describes him as “lucky.”  The General, he recounts, survived eight plane crashes, and was shot twice.  Vang survived one assassination attempt only because the bullet grazed his rib cage, barely missing his vital organs.  Another time, Vang was invited to a party in the Capital City, where assassins had hidden a machine gun behind a curtain at the end of a long table.  The plot was thwarted, however, when the electricity went out in the city. 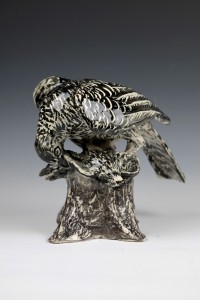 As Commander of the Hmong “Secret Army,” General Vang built schools for the Hmong populations displaced by fighting, and gave many Hmong youth their first opportunity for a formal education.   Before Vang’s reforms, the Hmong were primarily farmers, and largely illiterate.  Yang recounts with pride that the first Hmong individual to ever receive a Doctorate degree, Dr. Young Dao, was educated in one of Vang Pao’s schools.  Dr. Dao would eventually acquire a Ph. D. in social science in 1972 from the Sorbonne.

From the example of General Vang Pao, Jackie learned that good can arise even in the midst of bad or dangerous circumstances, providing opportunities for service to others.  This idea helped form a set of beliefs and a sense of duty that has long guided Yang.

Just as Yang seeks balance in his personal philosophy, balance in the natural world is a recurring theme in Yang’s art, which he often expresses allegorically.  Earlier this semester, he created a series of ceramic sculptures depicting larger birds of prey attacking smaller birds.  The sculptures, ripe with literal and metaphorical truths, symbolized Yang’s respect for the fundamental give and take of the universe.

For his sculpture of General Vang Pao, Yang took as his model a photo of the General, in military clothes, relaxing on a battlefield.  The General, Yang notes, dutifully went to the battlefield every day, making himself accessible to his troops.  Yang himself recalls seeing General Vang in the field, as well as in America.

Jackie Yang intends to give the completed sculpture to General Vang Pao’s son and his family, who reside in Minnesota.  The General’s son owned a home care facility for senior Lao-Hmong veterans in eastside Saint Paul.  For Yang, the sculpture is an acknowledgment of the family’s legacy, as well as their continued advocacy on behalf of the Hmong people.

Jackie nevertheless feels that he has not yet given to the community on the scale he would like to.  Asked about plans beyond his graduation from Inver Hills, Yang notes that he dreams of writing a book detailing his journey as a Laotian refugee.  He would also like to visit to his homeland, which he has not seen for over 30 years.

I watch him still sculpting as we converse.  Yang pauses, and says for his next piece he intends to make a different sculpture regarding the Vietnam War.  This time it will be of an American Soldier from that period, as a tribute to his fellow art student Jim.