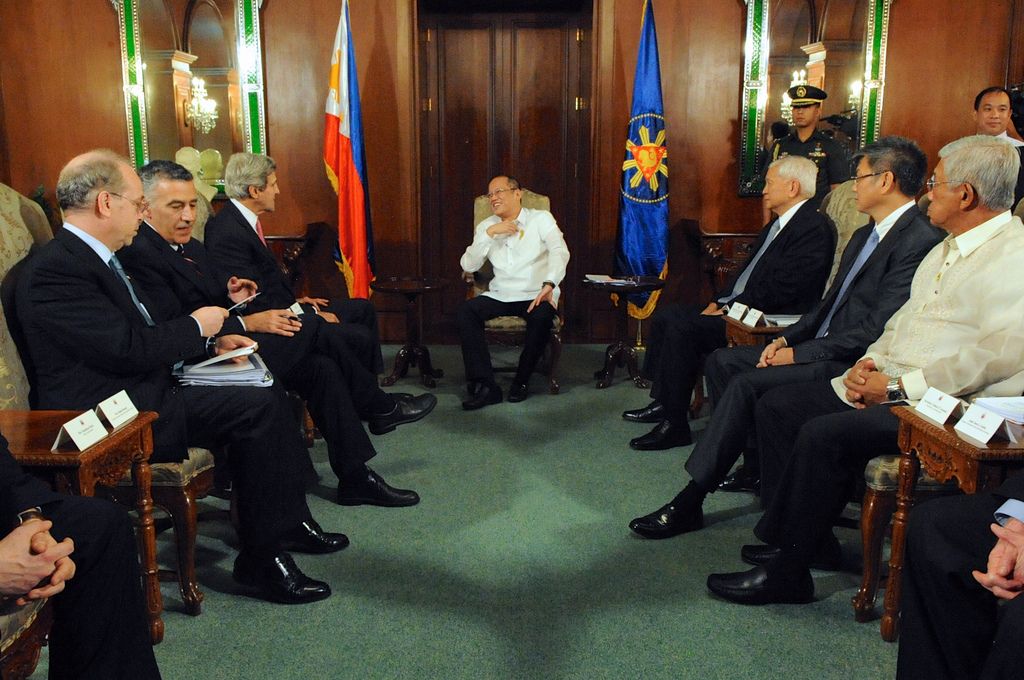 U.S. Secretary of State John Kerry and President Begnino Aquino of the Philippines sit with their respective delegations before a bilateral meeting and dinner at Malacanang Palace in Manila on December 17, 2013. [State Department photo/ Public Domain]

Office of the Spokesperson

SECRETARY KERRY:  Well, Rick, thank you very, very much.  Thank you for a great welcome here to the combined Chamber of Commerce and the Makati Business Club.  And I’m really honored by the distinguished guests who are here.  Thank you very much, all of you, for taking time to come and join us.  And for the executives from various businesses, thank you for taking a minute away.  And I hope our exchange here this afternoon, though it isn’t going to be the longest in the world, will give us a chance to share a few thoughts and a vision about the relationship between the Philippines and the United States, and the future.

We are obviously living in an extraordinary time in terms of business.  And during my confirmation hearing to be Secretary of State, I made it very clear that in my judgment, foreign policy today is economic policy to a large degree – not always everything, but very significantly.  And good economic policy is also good foreign policy.  So it really goes hand-in-hand.  We’re living in a voracious, competitive marketplace.  The spoils go to the nimble and the creative, and you need to be able to get out into the market and project and win your market share and do it everywhere.  That’s the difference of the world that we’re living in now.  And you can’t just be big and powerful and win all the time, as we’ve learned.  It used to be you could make mistakes but you’d still kind of lumber along.  I don’t think that’s true in today’s world.  It’s very unforgiving, as most of you know, so – and not unlike the world politics, I might add.

So I’m very, very happy to be here, and I really just want to begin by thanking all of you for your extraordinary efforts with respect to trying to save lives and bring relief to the victims of Typhoon Yolanda.  I know there are many in the American business community, along with our Embassy staff, who I am grateful to say – and I say thank you today – served as powerful ambassadors of our nation’s character and our compassion.

I want to thank Coca-Cola for donating trucks for the delivery of relief supplies which were some of the very first vehicles that were able to get on the road after the disaster.  I want to thank Proctor & Gamble for partnering with Coca-Cola to get the sari-sari stores back up and running and provide an immediate boost to the local economy.  I want to thank Dow for donating a generator to power Tacloban’s water plant, which ensured that many residents who had no access to water were not going to go thirsty and possibly even worse.  And I want to thank FedEx for donating space on your airplanes in order to be able to deliver relief supplies.  And Cargill is also donating $500,000 to help the devastated agricultural sector to be able to recover.  Citibank donated $230 – $250,000 to the Philippine Red Cross immediately after the typhoon struck, and I understand that Citi is going to make an announcement soon about an additional donation and long-term commitment with the Philippine Red Cross.

So we’re really grateful for those kinds of efforts.  That is great corporate citizenship, global citizenship, and we’re proud that the United States of America and American citizens that aren’t corporations reached out with not just their hearts and their words, but with their actions.

I also want to thank everyone at AmCham Foundation for helping to direct donations from across the American business community to professional relief organizations and to areas where support was absolutely needed the most.  By the way, tomorrow, I will be going down to Tacloban and personally viewing what is happening there, and we will be adding our efforts as a government to try to provide additional assistance.  The support from the American business community in the aftermath of the disaster, I believe, is really symbolic, a powerful symbol of the strength of the relationship between the United States and the Philippines.

And this is not a new relationship, as we all know.  Rick was telling me a moment ago that etched in stone at the chamber is the early date of 111 years ago when the chamber started its activities here.  And from that moment on, we have really stood shoulder-to-shoulder, particularly in a distinguished way during the course of World War II.  I just came from the cemetery where more than 17,000 – 17,201, I think – Filipino and American men and women are interred in the largest war cemetery in the world, for America at least.  And so there are 29 Medal of Honor winners interred at that cemetery, and that is a significant statement about how we stood shoulder-to-shoulder in the wake of World War II and against tyranny.  And then we stood shoulder-to-shoulder in the wake of one of the world’s worst natural disasters.  And we stand today, two vibrant democracies that are committed to each other’s strength and prosperity.  And I think so many of you in this room today are contributing to that and have over the years.

In the first half of this year, the economy of the Philippines was among the fastest-growing economies in the world.  And with our work together, I believe and President Obama believes that we can ensure that the Philippines continues in that direction in spite of everything that the nation has endured and lost over the course of the last months.  The Philippines proves the kind of transformation that is possible when free markets and free people and a free marketplace of ideas, combined together to be able to unleash the creative entrepreneurial spirit of individual human beings.  It’s a winning combination, and that’s why the country’s success sends a powerful message not just throughout the region, but on a global basis.

It wasn’t too long ago, I will tell you, that there was a very different Philippines, and I knew it and knew it well.  1986, when I was in my first two years as a senator, the first place I traveled to as a senator was come here to the Philippines.  And I came here for a number of different reasons and became involved in the effort to try to promote reform.  And I remember a long meeting, maybe a five-hour meeting with then-President Marcos, which inspired me to go back and change the law with respect to our relationship to the Philippines.  (Laughter.)  And that evolved into his calling a snap election and I then became involved with NAMFREL, the national movement for a free Philippines, and involved with Jose Concepcion and others and built a system to have accountability in that election.

Ultimately, I was sitting in the Manila – in the hotel when a young woman in tears came up to me and pleaded with me to come down to the cathedral to meet with some young women, and I did.  I went to the sacristy and met with those women, and it was a stunning story that unfolded as they, in tears and fearing for their life, told me they were putting vote tallies into the computer but none of those tallies were coming out on the tote board.  And that was the beginning of the end of the Marcos regime at that time.  We went back to America, reported it to Ronald Reagan, he sent Senator Laxalt over, and the rest is history.  And that was when Cory Aquino came to power, somebody I knew, worked with, and appreciated because of her having lived right next to my hometown in Boston, having lived in Newton.

So that’s my link here.  The truth is there’s an even earlier link because way back when, I had – my grandfather’s cousin was actually the governor of the Philippines in the 1900s, and so I always had this connection and sense of this country.

Now is a critical moment for the Philippines and the next chapter of our history together.  What I’m referring to is the potential of the TPP, the Trans-Pacific Partnership, which has an ability to be able to raise standards of doing business, open up new opportunities, and put 40 percent of the GDP of the world into one economic group that has an ability to be able to affect global trade, and obviously create millions of jobs.  We will welcome a Philippine delegation to Washington at the end of January for the start of technical consultations regarding this.  And the TPP, as I said, will bring 40 percent of the world’s economy – the world’s economy – together in one historic high-standard trade agreement.  The TPP will ensure that high standards will be set for workers and consumers, and the environment will be the standard for the most dynamic economic region in the world, and that will set an example to the rest of the world.

So on every front, the Philippines and the United States have an opportunity to forge a stronger foundation for economic growth and development, and that’s why we are working with our counterparts on intellectual property issues to make it possible for the removal of the Philippines from the Special 301 list.  In addition, that’s why we are committed to working with the Government of the Philippines so that the nation can return to the FAA’s Category 1 list, making the travel and exchange between our two countries much more efficient and much easier.

Each of these initiatives that I just mentioned has the potential to expand exchange between the United States and Philippines, and each of them has the ability to drive your businesses to even greater success and drive greater prosperity between our countries.

So today, I want to hear from you.  I want to take a moment just to walk around, have a chance to talk for a little while.  Let me thank you all for the extraordinary work that you are already doing for helping to build this deeper dynamic economic relationship between our countries.  And I hope that in the next few minutes – I’ve already picked up a couple of things I need to work on.  FedEx has an issue and some other things.  (Laughter.)  So I expect to be importuned in the next few moments, and I look forward to hearing from you all.

Thanks for the privilege of being here again, and it’s great to see you all.  I appreciate you coming.  Thank you.  (Applause.)