About 200 people held a rally and March in front of the Toronto Chinese Consulate June 3, to remember the Tiananmen Square Massacre. (Photo Courtesy of the Toronto Association for Democracy in China & Federation for a Democratic China)

Living in a place like the Twin Cities, I thought no one other than folks in Hong Kong still care about the Tiananmen Square Massacre that happened in Beijing June 4, 1989. But this past week in Toronto, I had the pleasure of attending several events hosted by Toronto’s Chinese Canadians to honor the thousands who died on that fateful night and remind people of what really happened and that the Chinese government must be held accountable for using brutal force to suppress a peaceful movement for democracy.

The events were organized by the Toronto Association for Democracy in China and the Federation for a Democratic China. The mostly volunteer-run organizations have been hosting Tiananmen memorial events for the past 23 years and organizers said attendance this year was the best in recent years.

The first event I attended was a Rally and March Sunday, June 3. About 200 people gathered in front of the Chinese Consulate in downtown Toronto. The Chinese Consulate was closed because it was a Sunday but the rally goers made sure they were heard and seen by chanting rally cries and holding numerous banners and signs. “Never Forget June 4,” “Freedom for China Now,” “Compensate the Victims’ Families,” “Release all political Dissidents Now,” and “Release Liu Xia Bo” were some of the chants.

“For the past 23 years, rain or shine, Toronto has, like many other cities around the world, maintained a commemorative vigil on the anniversary of the massacre,” said organizer Quan Cheuk Chung. “The issues that were central to the students’ demand for political reform and transparency 23 years ago are still with us today. For China to join her rightful place in this world, she must learn to respect the human rights of its citizens, abide by the rule of law, and most importantly, take its long march to democracy.”

He added that it is very important that people and other nations continue to put pressure on China because the human rights situations in China has deteriorated in recent years as the Chinese Government has grown more brazen in its crackdown on dissidents.

After several speeches, the gathering started to march to the University of Toronto. The march took about 30 minutes and ended at the Tiananmen Memorial at U of T. The memorial, established in 1992, is an art piece showing a crushed bicycle, yet the message was simple but powerful. The group held a candlelight vigil there until almost 10 p.m. 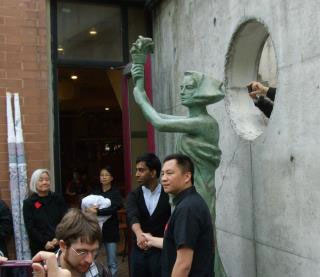 The unveiling of a 25-foot bronze statue of The Goddess of Democracy at the student center.

The next day, I went to York University for an unveiling of a 25-foot bronze statue of The Goddess of Democracy at the student center. An original, plastic version of the Goddess was placed at York University back in 1992, but in 2011, it was tossed out without announcement just prior to the arrival of several prominent human rights leaders from Hong Kong. Many suspected the Toronto Chinese Consulate applied pressure for its removal. But in less than one year, the Toronto Association for Democracy in China managed to raise fund to build this bronze version.

Before the unveiling, former Tiananmen student leader Wang Dan led a seminar to discuss what happened June 4, 1989 and the situations in China since then. Perhaps because of Wang’s presence, the room was packed and some people could not get in. But everyone, about 300 strong, was able to witness the unveiling of the statue afterwards. Wang lifted the cloth revealing the green statue, the work of famed Canadian sculpture Ruth Abernethy, who did it for free.

“This statue of the Goddess of Democracy is one way the world can keep this memory alive in the face of the Chinese government’s continue denial and blockage of any reference to the massacre on the internet,” Quan said. “With the addition of the Goddess at York University, Toronto is a proud city that hosts two permanent memorials to the 1989 student movement in China.”

“We hope that one day in the near future, we can gather for large commemorative events like these on Tiananmen Square,” organizer Winnie Ng said.

Attending these events in Toronto and seeing so many folks who are passionate about seeking justice and freedom for China warmed my heart, especially when I saw the number of young people in attendance. Even though the number of people who attended was not large, considering Toronto’s huge Chinese population, I now realize that many Chinese and Chinese Canadians have not forgotten about the Tiananmen Massacre.

The same cannot be said about the situation in the Twin Cities. The Chinese newspapers here are all obviously pro-China and care only to laud China’s economic might and turn a blind eye on its horrific human rights record. The same can be said about the local Chinese community, including many immigrants from China. Apathy is the best way to describe their attitude toward June 4. But these events this week in Toronto rekindled my hope that the Tiananmen Massacre will never be forgotten and that the disdain for the shortsighted tyrants of China who chose to kills their own people rather than grant them freedom will be forever condemned.