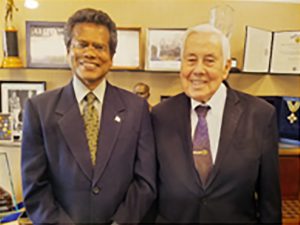 St. Paul, Minn. (June 2, 2017) —Dr. Patrick Mendis, who served as a Rajawali senior fellow at Harvard Kennedy School’s Ash Center for Democratic Governance and Innovation renewed his affiliation as an associate-in-research of the Fairbank Center for Chinese Studies at Harvard University.

“It is a distinct privilege to associate with the Harvard community of leading Chinese scholars and practitioners,” Mendis said of his affiliation at the Fairbank Center.

Born and raised in Sri Lanka, the Harvard sinologist came to the United States as a high school exchange student in Minnesota. After earning a degree in business administration and economics from the University of Sri Jayewardenepura, he returned to the University of Minnesota to complete his Master’s Degree in international development and foreign affairs, and his Doctorate in geography and applied economics and agriculture.

Prior to joining the Harvard Kennedy School, he served as a senior fellow and affiliate professor of public policy and international affairs at George Mason University. He is currently a visiting professor of Asian-Pacific Affairs at Shandong University in China, a visiting researcher at the National Confucius Research Institute of China, and a senior fellow of the Pangoal Institution, a think-tank in Beijing.

Mendis was a former Socrates fellow at the Aspen Institute and attended the Merton College as a Twenty-first Century Trust fellow at Oxford University.

Mendis was recently invited to meet with U.S. Sen. Richard Lugar (R-Ind.), a former Rhodes scholar at Oxford University, at The Lugar Center — a think-tank and platform for an informed debate on global issues in Washington, D.C. The former senator is a widely-respected statesman and once chaired the Senate Foreign Relations Committee. The two, who first met in the U.S. Senate in the 1980s, discussed current foreign policy issues, especially topics regarding global food security, bipartisan governance and U.S.-China relations. 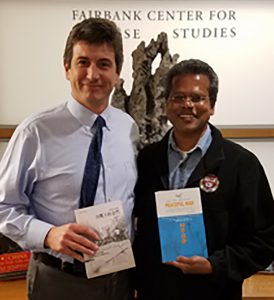 “I am very honored to have had this long conversation with the great senator of Indiana, a true gentleman and one of my great American heroes,” Mendis said.

Lugar later reflected on Mendis’ most recent research and his book, “Peaceful War: How the Chinese Dream and American Destiny Create a Pacific New World Order,” which was translated into Mandarin Chinese and published in Beijing.

In a letter to Mendis, Lugar described the work as a “remarkable service” for tracing the historical development of trade between China and the United States over two centuries. Lugar said the research on “Chinese Communist Party Chairman Mao Zedong was especially interesting as well as the observation of missed opportunities by the United States.”

“I read with great interest,” Lugar said in the letter.

Mendis is serving his second-term as a commissioner of the U.S. National Commission for UNESCO at the State Department, an appointment by the Obama administration.