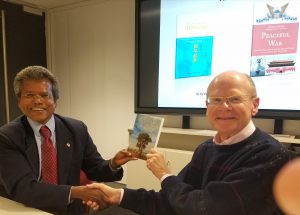 Prof. Patrick Mendis, left, with Paul Clark, professor of Chinese at the University of Auckland, who chaired a roundtable on China, the U.S. and the world, presenting a copy of book on New Zealand.

During the tour, Mendis said he explored the Sino-American relationship and its implications for U.S. allies in the Pacific. He held several discussions and lectures at several universities including the University of Auckland in New Zealand, the Australian National University in Canberra, and the Harvard Club of Victoria in Melbourne.

Paul Clark, a professor of Chinese at the University of Auckland, led a roundtable with several members of the Parliament and business leaders. It was organized by Dr. Xin Chen of the China Studies Centre at the University’s New Zealand Asia Institute.

Clark also lectured on China’s One Belt One Road (OBOR) initiative, that he said is increasingly important to New Zealand, which has become an OBOR hub of China’s South Pacific route.

In Melbourne, Mendis spoke to a group of Harvard alumni, government officials and business leaders at the headquarters of ShineWing, a leading international Asia-Pacific accounting and advisory firm in Australia. The Harvard Club of Victoria organized the event that was co-sponsored by ShineWing.

Mendis said the trip occurred just after completing his goal of visiting all provinces of China, where his book published in Mandarin Chinese in Beijing. 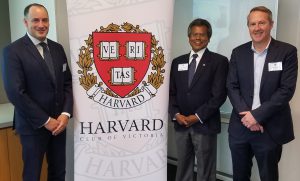 A University of Minnesota alumnus, Mendis is now affiliated as an associate-in-research at the Fairbank Center for Chinese Studies at Harvard University. He is also a distinguished visiting professor of Asian-Pacific affairs at Shandong University in Jinan and a visiting researcher at the National Confucius Research Institute in Qufu, the birthplace of Confucius.