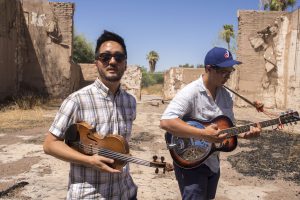 The first will take place in the Nelson Performing Arts Center at Northwest College at 7:30 p.m. Friday, Oct. 20. A second concert will take place in the original barrack at Heart Mountain Interpretive Center at 3 p.m. Saturday, Oct. 21, where Bashi will be joined by singer-songwriter Julian Saporiti, who will also give a talk about his work with Japanese American incarceration at Northwest College’s Intercultural House a noon Friday, Oct. 20.

All events are free and open to the public. Donations to support ongoing research are appreciated.

Bashi is an internationally touring singer, multi-instrumentalist and songwriter. In 2017 he began a collaborative project with Julian Saporiti, traveling to different sites of incarceration to explore Asian American history and identity through music and scholarship. While at Heart Mountain, Bashi will continue to film a documentary about his process composing a symphonic work inspired by visits to various sites of incarceration. In the upcoming concerts Bashi will perform selections from his rich catalogue of intricate indie orchestral pop.

Saporiti is a doctoral student at Brown University and lecturer at the University of Wyoming. He will perform songs from his “No-No Boy” project. Saporiti will also discuss this project further, describing how he turns his research on Japanese American incarceration into song during his Oct. 20 talk at the Intercultural House.

Bashi and Saporiti will be joined at both concerts by vocalist Erin Aoyama, a Brown doctoral student whose grandmother was incarcerated at Heart Mountain during World War II. The Oct. 21 concert will take place in an unusual venue, an original barrack from the Heart Mountain internment camp. The barrack was recently returned to the site by the Heart Mountain Wyoming Foundation and is currently under restoration.

Space is limited for this intimate performance. Reservations are requested. For more information or to reserve a spot, call Heart Mountain Interpretive Center at 307-754-8000 or send an email to [email protected]