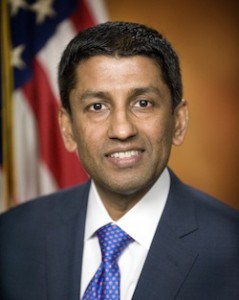 WASHINGTON, D.C. (March 5, 2016) — Based on reports in The New York Times and other sources, the AAPI Victory Fund is pleased that the White House is vetting Judge Sri Srinivasan for possible elevation to the U.S. Supreme Court. Judge Srinivasan is the first Asian American judge to ever serve on the D.C. Circuit and he was confirmed in 2013 with strong bipartisan support by a vote of 97-0. If nominated and confirmed, he would be the only immigrant on the current U.S. Supreme Court.

“We are pleased that President Obama is strongly considering a highly qualified Asian American for the U.S. Supreme Court,” said Shekar Narasimhan, chairman and founder of the AAPI Victory Fund. “However, we are disappointed that Senate Republicans have issued a letter indicating that they will not schedule a hearing regardless of who is nominated. Should the Senate not do its job, then the AAPI Victory Fund will ensure that obstructionist Senators are held accountable for their actions.”

The AAPI Victory Fund, which aims to mobilize the political power of the more than 18 million Asian Americans and Pacific Islanders in this country, urged President Obama in February to build upon the important strides he has made with our community and nominate the nation’s first Asian American or Pacific Islander Supreme Court Justice.

“The Asian American and Pacific Islander vote will not only be critical in the next presidential race, but also in key Senate races,” said Varun Nikore, vice chair for strategy & operations. “The AAPI Victory Fund is mobilizing in 6 states — Colorado, Florida, Nevada, North Carolina, Ohio and Virginia — and there are contested Senate races in all but Virginia. Senators and candidates that cannot even support a hearing for the U.S. Supreme Court nominee will feel the brunt impact of Asian American and Pacific Islander voters on Election Day.”

Article II, Section 2 of the U.S. Constitution mandates that the President nominate Article III judges — including U.S. Supreme Court Justices — “by and with the Advice and Consent of the Senate.” The Constitution further makes it clear that the Senate fulfills its Constitutional responsibility to ensure the effective functioning of our courts by giving that nominee fair consideration on the merits and a timely up or down vote.

“President Obama has a Constitutional obligation to nominate a U.S. Supreme Court Justice,” said Narasimhan. “The Senate has a Constitutional responsibility to give that nominee a hearing. The AAPI Victory fund will ensure that all Asian American and Pacific Islander voters know which Senators are not listening to the will of their constituents.”