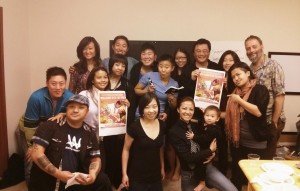 Don’t Buy Miss Saigon Coalition will be present in a peaceful opening night protest against stereotypes and misconceptions. (Facebook photo)

On the opening night of “Miss Saigon” at the Ordway Center for the Performing Arts, community members who have organized in protest of the production will hold a peaceful event for the public to gather in support for their cause of social justice for cultural presentation in the arts on Saturday, Oct. 8, from 6:30 to 8 p.m. across from the theater at Rice Park, 109 W 4th St, St. Paul, MN 55102.
This is the third production to appear at the Ordway. The Don’t Buy Miss Saigon Coalition organized as a voice against the stereotypes and misconceptions perpetuated by the production of Miss Saigon.
The Coalition has created the October 8 event as an opportunity for local Asian Americans and our allies to come together in solidarity and to share our own truth about what it means to be Asian American.
“The fact that Miss Saigon is playing at the Ordway which is located in the city of Saint Paul is troubling given our large Asian American population and the impact a play like this can have here,” said Chay Douangphouxay, organizer. “Saint Paul has seen a 20 percent increase of the Asian American population from 2000-2010 and has thirty-one percent of Saint Paul Public School students now Asian American. Asians are also the fastest growing racial group in the state and has one of the largest trans-racial, trans-national adoptee populations.”
To learn more about the play and what’s wrong with it, please visit the Don’t Buy Miss Saigon Coalition’s website at www.dontbuymiss-saigon.com. For information contact the Coalition through Chay Douangphouxay at [email protected], and Margie Andreason at 213-375-5572 or [email protected]