Exhibit to commemorate the Hmong people, culture and contributions since the migration from war-torn Laos 40 years ago. 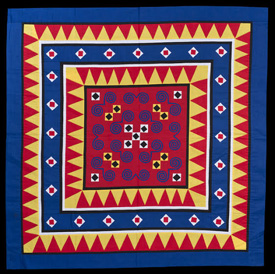 Paj Ntaub or “Flower Cloth”
This textile art consists of bold geometric designs, often in bright contrasting colors. Hmong girls learn how to sew and copy motifs from their mothers and grandmothers. At left is a wall hanging using reverse appliqué made or provided by May Ying Xiong and sold at Hmong Handwork, St. Paul, 1981. Visitors can see a display of 50 paj ntaub showcasing appliqué, embroidery and batik styles at the James J. Hill House, April 10-Nov. 29, 2015. (MNHS Collection)

ST. PAUL, Minn. — The Twin Cities metro is home to 66,000 Hmong, the largest urban Hmong population in the United States. Forty years ago, the Hmong began migrating to Minnesota, following their service fighting alongside American forces in the wars in Southeast Asia.

In commemoration of the anniversary a new exhibit, “We Are Hmong Minnesota,” will run March 7-Nov. 29, 2015, at the Minnesota History Center in St. Paul. It is the brainchild of independent researcher and writer Noah Vang, “Hmong Today” editor Wameng Moua, and Director of the Center for Hmong Studies and Concordia University Professor of History, Lee Pao Xiong.

The exhibit showcases Hmong culture and contributions to Minnesota and the nation over the past 40 years. Told through first-hand accounts and supported by artifacts and multimedia presentations, the exhibit presents rich stories of hardship and success.

“The Hmong are a resilient people. After fighting for the CIA in the secret war in Laos, many arrived in Minnesota with very little or nothing, and without a homeland,” said Noah Vang, exhibit developer. “But today we are politicians, professors, business owners and U.S. citizens.”

Public Programs, Companion Exhibit and MNHS Press Books
This exhibit is part of a larger MNHS initiative to commemorate the 40th anniversary of Hmong migration to Minnesota. Additional offerings include: 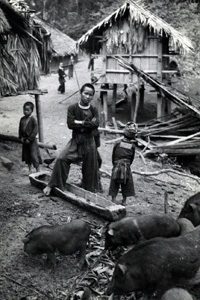 Typical Hmong Village
In Laos, before and during the war, Hmong traditionally lived in high elevation (above 3,000 feet). Aside from their slash-and-burn agrarian lifestyle, many families also raised domestic animals, including chickens and pigs. These children made sure the livestock were fed and tended. (Noah Vang Collection)

Other public programs include a film festival, lectures, a guest in the gallery series and a summer music performance. Visit http://events.mnhs.org/ to find out more.

About the Minnesota Historical Society

The Minnesota Historical Society is a non-profit educational and cultural institution established in 1849. The Society collects, preserves and tells the story of Minnesota’s past through museum exhibits, libraries and collections, historic sites, educational programs and book publishing. Using the power of history to transform lives, the Society preserves our past, shares our state’s stories and connects people with history.

The “We Are Hmong Minnesota” exhibit is divided into three sections: life in Laos, an art installation that evokes transition and life in Minnesota.

Life in Laos
Visitors begin by exploring what life was like in Laos and how life changed during the Secret War. A timeline documents change through historic photos and graphics while artifacts evoke everyday experiences. A multimedia piece takes visitors on a journey from ancient times through war and displacement to present-day Minnesota.

Transition
“Let Our Spirit Fly” art installation by Sieng Lee
In Hmong tradition, “spirit paper” represents gold and silver. At funeral ceremonies, the paper is folded into boats and then burned, providing protection, abundance, health and healing for the ancestors. In this art installation, thousands of brightly colored spirit papers are used to mark what the artist calls “a remembrance of the countless lives, memories, and heartaches that have paved the way for Hmong Americans today who are still living in transition, looking to redefine a future.” 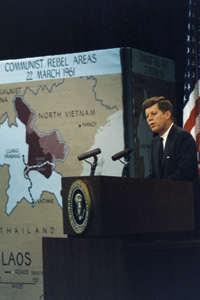 President John F. Kennedy on the Secret War in Laos
“I want to make it clear to the American people, and to all of the world, that all we want in Laos is peace, not war–a truly neutral government, not a Cold War pawn, a settlement concluded at the conference table and not on the battlefield.” President John F. Kennedy made these remarks at a press conference concerning the situation in Laos on March 23, 1961. Later that year, he dispatched several hundred CIA personnel to recruit and train Hmong soldiers to defend America’s objectives inside Laos. The maroon-shaded area on the map had the largest Hmong population and was where the heaviest fighting took place during the U.S. Secret War in Laos. (JFK Library)

Life in Minnesota
The first Hmong who came to Minnesota were refugees, fleeing violence and political oppression. They came to America without a homeland, in search of a new life. In this area visitors can explore Hmong progress to citizenship, the first social service agencies, treasures brought to Minnesota, the 18 clans, family celebrations, language, religion and spirituality, culture, clothing, Hmong successes, food and farming. An interactive Hmong marketplace is open for visitors to learn about traditional Hmong foods. A wall of art displays work by six contemporary Hmong artists, including paintings by Cy Thao on loan from the Minneapolis Institute of Arts and photography by Pao Houa Her, who says Hmong art is profoundly personal because it is about “asking questions and then also healing, too–to heal something that nobody else can help you heal.”

On Display
Throughout the exhibit, visitors will encounter historic and contemporary photographs, oral history audio clips, and artifacts and objects on loan, including: 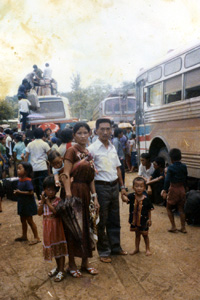 Leaving Ban Vinai
Koua Vang and his family, like thousands of other Hmong families who became refugees in the aftermath of the war in Laos, boarded a bus to leave the Ban Vinai Refugee Camp in Loei Province, Bangkok, Thailand. In 1979 they left Bangkok and arrived in the United States. (Vang Family Collection)

MNHS Programs
A series of programs will be offered in conjunction with the exhibit “We Are Hmong Minnesota,” March 7-Nov. 29, 2015. 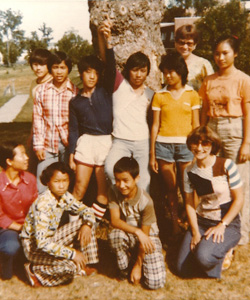 Liberty Plaza Youth Program
“Many of us entered middle and high school when we first arrived to Minnesota from the refugee camp. It was difficult to learn English so we joined after-school and summer programs that helped us excel,” said Neng Vang Lo, who was enrolled in the 1978 Liberty Plaza Youth Program. The program helped many Hmong refugees find summer jobs and build their skills. (Neng Vang Lo Collection)

Hmong Community Programs
The public is invited to explore annual programs and special events held in the Twin Cities throughout 2015.

MNHS offers a wide range of resources on Hmong history including artifacts, MNHS Press books and educational programs. In addition, scholarly content can be found through the Center for Hmong Studies at Concordia University, the Hmong Cultural Center and the Hmong Archives. 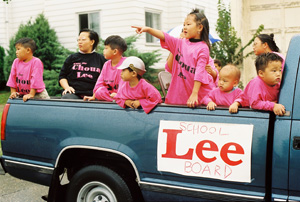 Election of Choua Lee
Choua Lee won a seat on the St. Paul School Board in November 1991. Her victory encouraged other Hmong Americans to run for office as a way to better their community. She also helped pave the way for Hmong women to hold office. A decade later, attorney Mee Moua successfully ran for the Minnesota Senate as the DFL-endorsed candidate during a special election in Jan. 2002, making her the first Hmong in the United States to be elected to a state legislature. (Cheu Lee Collection) 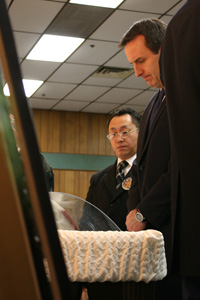 Funeral for Minnesotan Kham Xiong
Governor Tim Pawlenty attended the funeral of Pfc. Kham Xiong, who was killed at Fort Hood, Texas, on Nov. 5, 2009. Xiong was at the military base getting ready for deployment to Afghanistan when the shooting took place. Xiong was among 13 killed and many others injured. Pawlenty issued a proclamation: “The State of Minnesota recognizes Private First Class Kham Xiong for his dedicated service to and sacrifice for the people of this country with our deepest gratitude, and our thoughts and prayers are with his family, friends, and community.” Next to Pawlenty is Songtou Xiong, family member and master of the funeral ceremony. (Noah Vang Collection)

What impact have the Hmong had in Minnesota and the country? The numbers tell the story–and it’s significant. 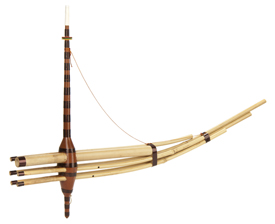 A timeline history of the Hmong people.

The exhibit “We Are Hmong Minnesota” is being developed by members of the Hmong community in partnership with the Minnesota Historical Society.

Noah Vang, exhibit developer, “We Are Hmong Minnesota”
Noah Vang is an independent researcher who specializes in the oral history of the Hmong-American experience. He has published a 410-page book titled “Major General Vang Pao: An Illustration of His Remarkable Life.” Vang was born in Laos and migrated to the United States from the Ban Vinai refugee camp in Thailand in 1989. In 2004, after completing his undergraduate degree at the University of Wisconsin-Milwaukee in Journalism and Mass Communications, he settled in St. Paul.

Brian Horrigan, exhibit developer, “We Are Hmong Minnesota”
Brian Horrigan is an exhibit developer for the Minnesota Historical Society. In this role he has researched, developed, and implemented exhibits and interpretive trail projects at the Minnesota History Center in St. Paul and at state historic sites. Horrigan’s most recent exhibits include “The 1968 Exhibit” and “Minnesota’s Greatest Generation.” Prior to MNHS, Horrigan worked with the U.S. Information Agency on official U.S. cultural exchange exhibits for the USSR and Eastern European countries. He also curated the “Yesterday’s Tomorrows: Past Visions of the American Future” exhibit at the Smithsonian Institution’s National Museum of American History.

Lee Pao Xiong, advisor, “We Are Hmong Minnesota”
Lee Pao Xiong is the founding director of the Center for Hmong Studies and professor of American Government/Political Science and Hmong Studies at Concordia University, St. Paul. Throughout his career, Xiong has served as the Director of Housing Policy and Development for the City of Minneapolis, President and CEO of The Urban Coalition, Executive Director of the State Council on Asian-Pacific Minnesotans, Hmong American Partnership and the Hmong Youth Association of Minnesota. Xiong received his Bachelor of Science degree in Political Science from the University of Minnesota and has recently completed coursework for a Doctorate in Public Administration from Hamline University.

Wameng Moua, advisor, “We Are Hmong Minnesota”
Wameng Moua is the publisher of “Hmong Today,” a community newspaper entering its second decade of publication. He is also the voice behind HMONG-FM, a radio variety show focused on the Hmong community, spoken entirely in English and broadcast weekly on KFAI 90.3FM. As a journalist and photographer, Wameng has first-hand knowledge of Hmong assimilation and growth in Minnesota. Wameng Moua migrated to Minnesota in 1981 where he entered the fourth grade at Phalen Lake Elementary in St. Paul and finished his education at Macalester College.

Directions: At the junction of I-35E and I-94 on the western edge of downtown St. Paul at the corner of Kellogg and John Ireland boulevards.