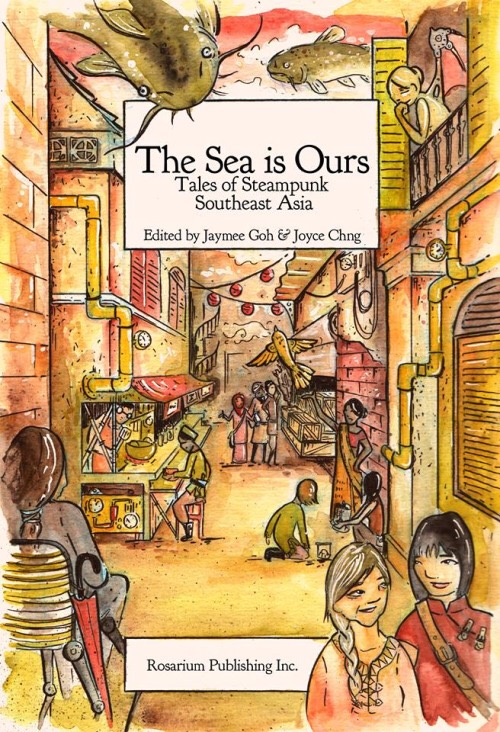 Riverside, Calif. (June 20, 2015) — Jaymee Goh is co-editor along with Joyce Chng, of the forthcoming science fiction anthology, The SEA Is Ours, from Rosarium Publishing.

The SEA Is Ours is a collection of tales from a Southeast Asian perspective in the Steampunk Genre. She’s currently studying in California for her PhD, and is a prominent blogger and commentator on issues of science fiction and diversity issues in literature. Asian American Press had a chance to catch up with her.

Asian American Press: Tell us a little about yourself, and how did you develop an interest in science fiction?

I come up more in the fantasy side of the speculative, with an early love of mythologies, Tolkien, Forgotten Realms novels and other such high fantasy settings. I also wore down my grandfather’s copy of Monkey (the Arthur Waley translation, better known as Journey to the West). But the love of the fantastic imagination carries over into science fiction too. Malaysia gets quite a fair bit of Japanese media, and I was a fan of all the usual suspects in the 90’s and early 00’s, especially the space cowboy stuff and portal fantasies. I took a course in my second year of university on Golden Age science fiction, and I also really love Star Trek.

AAP: There are many definitions of Steampunk out there right now, but what’s your personal favorite way of explaining the concept to someone who just has no idea at all what it’s about?

JG: Steampunk is a combination of a few different conceits: 1) an alternate world history which is precipitated by 2) technofantasy, thereby accelerating or anachronistically developing technology into 3) evoking an incipient technological revolution.

As it is now, most steampunk tends to imagine a retrofuturist neo-Victoriana, accelerating the Industrial Revolution of the 19th century to either illogical extremes, or with present-day scientific knowledge. Some folks even call it “Victorian science fiction” which I resent very much! It limits what steampunk is and can do. I prefer my formulation, because I made it so that it can be used across different geographical, temporal, and geopolitical settings, and doesn’t necessarily call up particular times and places.

AAP: How did “The SEA Is Ours” come about?

JG: I’d been kicking the idea around for a couple of years, because as a whole I felt unsatisfied by representations of Southeast Asia in most of speculative fiction, and felt very strongly that steampunk would be a really great way of talking about the myriad histories in the region. Joyce Chng and I were a couple of the few SEAsians actively writing steampunk at the time, but a corpus doesn’t come about with just a few people. I’m Malaysian and have very little knowledge of the stories and peoples of other SEAsian countries, and I wanted to give folks an opportunity to explore SEAsianness in fiction.

Bill Campbell of Rosarium Publishing offered to publish us, and it was off to the races.

AAP: What are some of directions in Steampunk literature you still feel are unexplored? Where are we seeing significant innovations?

JG: In whichever directions steampunk has gone, I still feel there could be a lot more interrogation of the stakes involved. For example, there’re several queer steampunk stories out there (the Steam-Powered series, for starters) and many stories that do interesting things with gender, but most examinations of gender constructs still rely on gendered automatons.

Sofia Samatar had a wonderful critique recently on how steampunk tends to focus on the sites of metropolis, because of the industrial aspect of it (in relation to African steampunk, and how defenses that African steampunk could absolutely be a thing because of course African civilizations have had cities), and it would be interesting to see if rural, or even non-industrial, steampunk becomes more of a thing. Steampunk being tied to the 19th century is a steampunk that still dreams according to capitalist paradigms; surely there must be industrialization that isn’t tied to capital (this might go the solarpunk way, though, but still).

One thing I do think much of steampunk literature has focused on, and done it well, is the effects of technology on human relations–partly because there is so much precedent in other kinds of sci-fi, but I think we hit on some pulses of desire that isn’t so obvious and still maintains a sense of optimism at the same time.

AAP: You’re pursuing your doctorate right now, what’s the focus of your dissertation?

JG: It is, in a nutshell, on the replication of white supremacist narratives in steampunk.

I have written a great deal about focusing on People of Color in steampunk, and marginalized histories, but I’ve observed over the years that people seem to have to *want* to know these histories before they find them; they’re not part of how steampunk is presented to folks unfamiliar to steampunk. Part of it is how easily steampunk, as an aesthetic, has been taken up commercially; part of it is just what people “read” into steampunk, often unconscious choices due to force of habit. My dissertation will take up how all these processes feed into each other, creating the mainstream whitewashed steampunk that most of us see now.

AAP: What was the most difficult thing about putting this anthology together?

JG: There were a couple different challenges, mostly at the submission stage. We had a fair number of submissions that were not set in Southeast Asia… for some reason folks saw “Asia” and immediately sent in stories set in Japan and China! Joyce and I wanted a wide range of stories across SEAsia, but all of our stories in this volume are from the Maritime countries (Vietnam, Thailand, the Philippines, Singapore, and Indonesia). I’m hoping this will change in the future.

The other challenging thing was dealing with anxieties of authenticity. Of course one wants to be true to the heritage and histories being presented, but in a speculative exercise, how much mis-representation might happen? How might this be taken up by non-Southeast Asians? The pressure of responsibility was strong. I had a lot less trouble once I decided to trust in the writers and simply work on the stories for what they are: stories. As for questions of authentic representation, that’s what conversations are for!

AAP: As a writer, when are you most satisfied with a story?

JG: O, when it gets published? I’m very easily pleased with a first draft–at least it got written! But I may put it off until I’ve thought about it more. And when it’s done, I’ll put it away and think on it even more when I come back to it with fresh eyes. (Unless there’s a deadline.) It’s only after it’s run through the gauntlet of editing and is actually published that I’ll feel most satisfied. But “most” may not mean “completely”….

AAP: What’s your advice for anyone thinking of stepping into the steampunk scene today?

JG: There is a wider range of stuff out there than what’s on the mainstream markets! Steampunk is not to be slept on–the very best stuff is out there for the discerning eye.

AAP: What’s next for you?

JG: Hopefully, my dissertation will write itself. I have many projects for the future, a never ending litany of novels, short stories, and poems to write, and I’d like to amp up my sewing skills! I also have many anthology ideas I’d like to work on. Hopefully I can pull myself together to start a SEAsian SFF zine, which would be fun.

The SEA Is Ours is anticipated for release in November, 2015 from Rosarium Publishing: http://rosariumpublishing.com. You can follow Jaymee Goh at her blog Silver Goggles: http://silver-goggles.blogspot.com. You can also visit the SEA steampunk blog: http://sea-steampunk.blogspot.com.