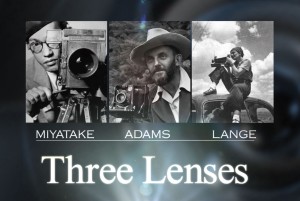 Santa Ana, Calif. (March 6, 2014) — Orange County Media Company, Video Resources, is commencing production of “Three Lenses”, its first documentary feature that examines the role of three American Photographers in piercing the veil of secrecy surrounding the WWII Japanese American Internment and questions the possibility of a similar injustice happening in the future.

The injustice of the internment of innocent Japanese American Citizens during WWII, the role fear, racism and greed played in bringing this about, and the significance of the work of three iconic American photographers: Documentary photographer, Dorothea Lange; Landscape photographer and social activist, Ansel Adams and incarcerated camp photojournalist, Toyo Miyatake, in bringing the news of this sad moment in American history to the attention of present day Americans, is the focus of documentary feature, “Three Lenses,” currently in production at Santa Ana Media Production Company, Video Resources Inc.

The story of the internment has great relevance for today’s world, according to “Three Lenses” Executive Producer, Ecar Oden.

“Some Americans possess a passing knowledge of the internment,” he said. “But they may not appreciate the role that fear, racism and greed played in the singling out an entire race of people – most of whom were American citizens – largely because they shared ‘the face of the enemy.’

“Three Lenses” is not so much a Japanese American story as it is an American story made all the more relevant and timely by the very real possibility – recently confirmed by Supreme Court Justice Scalia – that it could easily happen again.

“A greater knowledge by more Americans of this time in history is our society’s best protection from similar injustices happening in the future,” Oden concluded.

As of March, 2014, more than a dozen interviews with historians, camp internees, family members and other contemporary experts have been completed, with an equal amount on the books for the coming months.

However, finding former internees to appear on camera has been a challenge, according to writer-producer, Jeff Redd. “More than 120,000 men, women and children were relocated to the 10 internment camps during WWII, but few remain that are willing or able to tell of their first hand experiences there. We would love to speak with any former internee willing to share their stories, journals, home movies or photos.”