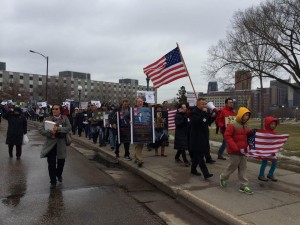 The protestors, carrying American flags and signs reading “Justice for Liang, Justice for All!” “Justice-Yes, Politics-No,” “No Scapegoat!” “Tragedy Not Crime!” “One Tragedy Two Victims” gathered by the Minnesota World War II Memorial at 11 am and marched around the State Capitol Lower Mall. They also signed petitions and handed out flyers to passersby.
On Nov. 20, 2014, Liang and his partner, Officer Shawn Landau, were conducting a vertical patrol in the darkened stairwell at the Pink Houses. His bullet ricocheted off a cinder-block wall and fatally struck the unarmed Gurley in the chest.
Liang, 28, could faces up to 15 years in prison after he was convicted on Feb. 11 on manslaughter and official-misconduct charges for the November 2014 shooting accident. He was immediately fired from the NYPD upon the Brooklyn jury’s verdict. He will be sentenced April 14.
Liang is the first NYPD officer to be convicted for a police-involved shooting in a decade. He is the only one who did not intentionally use a weapon but he ended up being the only one who has been indicted.
The supporters believed that Liang was a “scapegoat” for the police department and a victim of “selective justice.” They demanded accountability from NYPD for its irresponsible patrol assignments, poor training of officers, and lack of support for its probationary officers.
Nationwide, over 100,000 Chinese-Americans in more than 40 cities were protesting Liang’s conviction simultaneously on Saturday.
The Minnesota rally was organized by the Minnesota Chinese Association (MCA), an organization formed by a group of Chinese Americans via a virtual platform.
Share