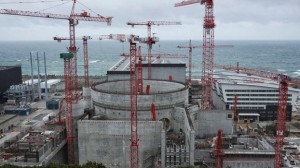 The Fukushima Daiichi nuclear plant in a scene from “Pandora’s Promise”. (Photo by Robert Stone)

Meltdowns like Fukushima have made nuclear power synonymous with global disaster.

But what if we’ve got nuclear power wrong?

In the next few decades, humankind will need to double, or even triple energy production as billions of people in the developing world lift themselves out of poverty and begin to live modern lives. Unless the energy of the future is clean and non-CO2 emitting, the risk of triggering global climate catastrophe is almost certain. With the world’s unquenchable thirst for energy and its resulting threat to our environment, the stakes may be nothing less than the survival of the planet. This monumental dilemma, and the limitations of solutions like wind and solar, have left the mainstream environmental movement on the verge of utter disarray.

Tackling this challenge head-on comes “Pandora’s Promise”, the highly anticipated and debated new work by internationally-acclaimed filmmaker Robert Stone. Three years in the making and filmed on four continents, this meticulously researched and beautifully crafted film asks whether the one energy source that has the ability to completely replace fossil fuels might be the one technology that environmentalists fear the most: nuclear power. 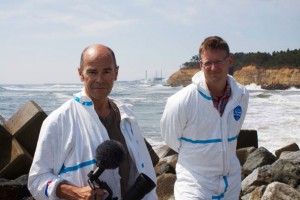 Robert Stone and Mark Lynas in a scene from “Pandora’s Promise”. (Photo by James Hollow)

“It’s no easy thing for me to have come to the conclusion that the rapid deployment of nuclear power is now the greatest hope we have for saving us from an environmental catastrophe,” says Stone. “Yet this growing realization has led me to question many of the founding tenets of traditional environmentalism, from the belief that we can dramatically reduce our energy demand through energy efficiency, to the belief that solar and wind will one day power the planet. The almost theological adherence to a set of unquestionable beliefs by most liberals and environmentalists has likely contributed as much or more to prolonging our addiction to fossil fuels as the equally appalling state of denial among many conservatives when it comes to climate change. Both sides are locked into rigid, self-righteous ideological positions with potentially disastrous consequences for us all unless we begin to face the facts.

Uniquely positioned to explore this question, Stone began his filmmaking career directing one of the great anti-nuclear documentaries, the Oscar-nominated Radio Bikini. In 2009, his celebration of the rise of the modern environmental movement, Earth Days (Sundance Closing Night Film), established him as one of the great chroniclers of environmentalism.

remember,” say Stone. “My mother read me Silent Spring when I was nine and the specter of the

family. So my anti-nuclear and environmental roots run very deep.”

With a no-holds-barred approach to nuclear power’s troubled past, Stone opens “Pandora’s Promise” with a trip inside the “exclusion zone” at Fukushima, accompanied by British climate expert Mark Lynas. He moves on to revisit and meditate on the iconic accidents at Three Mile Island and Chernobyl. Investigating the genesis of our collective anti-nuclear psyche – from the dropping of the atomic bomb on Hiroshima, the shadow of nuclear weapons testing and the entire baby boomer generation coming of age during the Cold War – Stone reveals that much of what passes for common knowledge about nuclear energy turns out to be based on a false premise: the conflation of nuclear power with nuclear weapons. 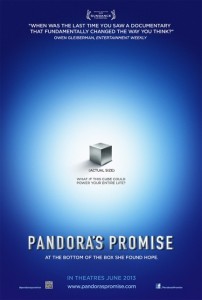 Intrigued by the story of a growing number of environmentalists who have had a fundamental change of heart about nuclear energy, Stone elegantly juxtaposes the personal narratives of five extraordinary individuals – Stewart Brand, Richard Rhodes, Gwyneth Cravens, Mark Lynas and Michael Shellenberger – to explore how and why they have come to see advanced nuclear power as humankind’s greatest hope. Tracing their transformations, Stone turns to science, taking viewers along for the ride on his subjects’ intellectual odyssey. The film also reveals the career trajectories of two pioneering scientists who led the development of a safer and very different nuclear energy technology than what the world has come to know.

Rather than being dismissed after Fukushima, nuclear power is now gaining traction, with President Obama cheering the U.S. Department of Energy’s purchase of small modular reactors, China and India aggressively pursuing a dramatic expansion of their reactor fleet with advanced nuclear designs, and climate scientist James Hansen’s recent scientific paper focusing on the promise of nuclear energy as our best hope for dramatically reducing CO2 emissions.

As a new generation looks beyond the ideological orthodoxy that has commanded mainstream environmental thinking on climate and energy – on both the Left and the Right – nuclear power will inevitably be a part of this critical debate.

Everyone thinks they know the story of Pandora’s Box: she opens the box and all the terrors of the world come flying out. But what most people forget, or perhaps never learned, is that the story does not end there. For according to the myth, at the bottom of the box, Pandora found hope.