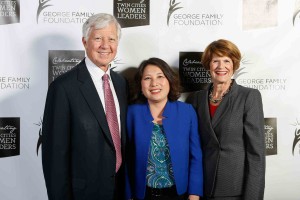 “Celebrating Twin Cities Women Leaders” was held at the Guthrie Theater on Tuesday in conjunction with a preview performance of Wendy Wasserstein’s Pulitzer Prize-winning play, The Heidi Chronicles. Written in 1989, The Heidi Chronicles is a story of women struggling to make greater contributions to the world of art, business and government.

The event celebrates women who have served as CEO, board chair or president of large corporations, colleges and universities, government and nonprofit organizations, health care, and major arts organizations in the Twin Cities. Nine groundbreaking women leaders will also be honored posthumously at the event for their contributions in creating the quality of life present in the Twin Cities today.

“We are pleased to honor MayKao Hang for her leadership and contributions to our community. I find it immensely gratifying the number of talented women who have led the Twin Cities in building institutions and solving significant social problems,” said Penny George, president of the George Family Foundation. “I hope the community realizes how very fortunate we are for their dedication and their leadership.”

Added Bill George, former chair and CEO of Medtronic who currently teaches at Harvard Business School, “Ever since Penny and I moved to Minnesota in 1970, we have been astounded by the remarkable women who have built the character, culture and quality of life of the Twin Cities. These women are leading or have led our major corporations, government organizations, nonprofit foundations, health care, universities and colleges and the arts. We are proud to recognize these outstanding leaders.”

“MayKao is a tireless champion for people in our community who need help, hope and training in their daily lives—both those served by the Wilder Foundation and others,” said Robyn Hansen, Chair of Wilder Foundation Board of Directors. “The other members of the Wilder Board and I feel privileged to work alongside her and witness her leadership firsthand. She is a daily inspiration to us.”

According to the 2013 Minnesota Census of Women in Corporate Leadership, produced by St. Catherine University and co-sponsored by the Minnesota Women’s Economic Roundtable, women are gaining ground in corporate leadership positions statewide. Fifty-two of Minnesota’s 100 largest publicly held companies have both women in corporate directors and women executive officers. In 2008, women held 117 board seats and only four women were CEOs in the state’s top companies. By 2013, there were 119 women board members and seven CEOs.

The mission of the George Family Foundation is to foster wholeness in mind, body, spirit and community by developing authentic leaders and supporting transformative programs serving the common good. The guiding philosophy of the George Family Foundation is to invest in people, programs and initiatives that further the mission of the Foundation and help build the communities in which we live. For more information, visit www.georgefamilyfoundation.