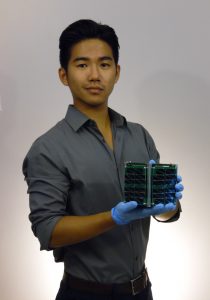 GRAND FORKS, N.D. (July 16, 2016) — While many 19-year-olds are wasting their time away playing video games, one University of North Dakota student is starting his own company.

While stories of teen entrepreneurs are not that unusual this is not just any company. Alexander Holland is starting a company that will sell small satellite parts to make it so that his peers nationwide can build and customize their own satellites.

“We want to make that ‘spark’ that enables kids’ dreams of space exploration come true,” said Holland, who started the venture with recent UND graduate Michael Wegerson and his identical twin brother Sean Wegerson, who recently graduated from the University of St. Thomas in St. Paul, Minn. “We want to show people that spacecraft development isn’t as complicated as it may seem.”

Holland secured funding from the UND Center for Innovation’s Muller Internship Fund to help make his dream of founding a business a reality. With this, he was able to devote time to planning for and launching his business.

The spark for this idea came from his work on UND’s OpenOrbiter program, where Alex was involved in the fabrication of a CubeSat structure for a satellite so small you can hold it in the palm of your hand.

Holland and team have translated their enthusiasm for space into a zeal for driving science, technology, engineering and math learning in others. Their business, Open Space Frontier Technologies LLC, is gearing up to sell both complete satellites and components. Prospective spacecraft owners can simply add their own payload to a complete satellite or develop some components from scratch and buy others from the company.

“We’re thrilled that Alex, Michael and Sean have decided to take the OpenOrbiter designs and make them more accessible,” commented OpenOrbiter Small Satellite Development Initiative Director Jeremy Straub. “The whole goal of the project was to make the designs available to the widest possible community. Having ready to configure and fly satellites, bare-bones satellites and components certainly expands the potential user base for the designs.”

Holland, who is an engineering student, knew little about starting a business before setting down this path and had to educate himself about how to go about the process.

The company, which is still working to build out its full product line, already has its first order. It will be designing, developing and fabricating the structure for the OpenOrbiter 2 spacecraft, which is set to be twice as large as the original model. The OpenOrbiter Small Spacecraft Development Initiative at the University of North Dakota is working to launch North Dakota’s first spacecraft. The CubeSat being developed will demonstrate the ability to make a functional spacecraft for only a few thousand dollars — instead of tens or hundreds of thousands of dollars. A largely student-driven effort, OpenOrbiter is changing who has access to space by providing a low-cost, easily customizable framework for others to use as the basis for their own satellite.