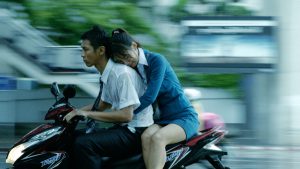 Lianqing (Ke-Xi Wu), seated in back, and Guo (Kai Ko), in a scene from “The Road to Mandalay” (Photo courtesy of Seashore Image Productions / Flash Forward Entertainment)

Since its premiere and win at the Venice Film Festival last year, Myanmar born Taiwanese director Midi Z’s feature has garnered accolades at various film festivals. “The Road to Mandalay” will have its screening next Monday, July 3 at the New York Asian Film Festival.

The realistic feature about the plight of illegal migrant workers is hauntingly relevant.

It is interesting to note that the English title of the film, “The Road to Mandalay,” is the opposite of the Chinese. The former indicating Mandalay as a destination, while the latter 再見瓦城 literally means ‘Goodbye Mandalay’. Why is there such a contradiction? I wouldn’t know exactly how the two titles came to be, but they serve the purpose of representing the exact opposing sentiments of the film’s two main characters, Lianqing (Ke-Xi Wu) and her boyfriend Guo (Kai Ko).

Lianqing and Guo are rural dwellers from Myanmar who meet while smuggling themselves into Thailand. The seed of love is sown in Guo from that point when his tall frame crawls into the cramped cargo space of the small, smuggling truck and lets Lianqing takes the front seat he has paid extra for. Once in Thailand, they go their separate ways.

Without a work permit, they can only settle for whatever job they can find. Through his cousin, Guo begins to work in a factory while Lianqing washes dishes in a dingy eatery. But Guo finds ways to seek Lianqing out and helps her switch to his work place, an offer which the fiercely independent Lianqing has to accept after the police raid the eatery for illegal workers.

Mandalay, which was once the capital city of Myanmar then known as Burma, is never shown on screen. It’s like a symbolic home in the backdrop for both main characters. To Guo, it’s a place to return to after he has saved enough money working in Thailand, to get married and settle down in. To Lianqing, however, it’s a point of departure to reach for her dream, to work in the city, and someday, go further to Taiwan.

While the film is a bold depiction of social realism — the vulnerable migrants as prey for corrupt government officials and exploits of small business owners and smugglers — ‘The Road to Mandalay’ is above all a poignant story of unrequited love. Writer director Midi Z’s heart-wrenching screenplay is well executed in a sensitive style, leading us in slow-paced revealing. The aesthetics of the cinematography act like sarcasm in contrast to the harsh living and working conditions of the characters. 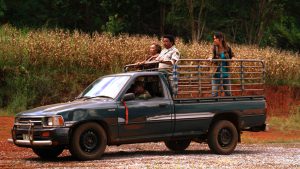 Hurdles after hurdles, as a last resort, Lianqing makes a decision to earn some fast money to pay for a work permit in the black market. Director Z handles the episode in a most unique way. The Kafkaesque scene with a giant lizard assailing Lianqing–the creature representing all that is repugnant to her–is a visual metaphor that is shocking yet appropriate in context. I count that scene as one of the most imaginative I have seen in a while.

Director Z continues on with his audacious style leading us to an ending that is stark and heartbreaking. “The Road to Mandalay” is an important feature, a distinguished work for the NYAFF to showcase.  It screens on Monday, July 3. For more info visit the festival website.