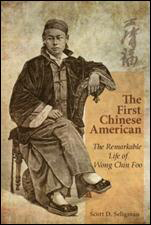 Just released by Hong Kong University Press, The First Chinese American: The Remarkable Life of Wong Chin Foo fills in a forgotten chapter in the struggle for equal rights in America. The first to use and define the term “Chinese American,” Wong defended his compatriots against malicious scapegoating and urged them to become Americanized to win their rights. He founded America’s first association of Chinese voters and labored to get laws that denied them citizenship repealed. Wong challenged Americans to live up to the principles they freely espoused but failed to apply to the Chinese in their midst.

“America’s civil rights movements have all had their Martin Luther Kings, their César Chávezes and their Gloria Steinems. But to whom can Chinese Americans point?” Seligman asks. “More than 70 years before Dr. King dreamed of an America that judged people according to the ‘content of their character,’ Wong Chin Foo defied those who wished to exclude Chinese by declaring that only ‘character and fitness should be the requirement of all who are desirous of becoming citizens of the American Republic.’”

Through lectures and articles, Wong took on critics of America’s Chinese and demystified Chinatown lives. He founded New York’s first Chinese newspaper in 1883, and was the first to introduce American readers to “chop suey.” A trailblazer and a born showman, he proclaimed himself China’s first Confucian missionary to the United States. He famously bested the standard bearer of the “Chinese Must Go” movement in a public debate. And he testified before Congress – probably the first Chinese ever to do so – in support of citizenship rights.

No photographs of Wong Chin Foo were known to exist before Seligman undertook the project of documenting Wong’s life story. But in the course of his research, he had occasion to contact Bucknell University, whose predecessor institution – Lewisburg Academy – Wong attended as a young man. It was on a second pass through the files that Bucknell’s archivist unearthed a portrait of Wong taken in 1870 when he was about 23 years old. That photo, in turn, has served to authenticate at least four other portraits of him currently residing in private collections.

“Wong Chin Foo was the earliest, most visible Chinese public advocate speaking and writing in English for the rights of Chinese in the U.S. Scott Seligman has rescued his life story in a thoroughly enjoyable narrative that adds significantly to our knowledge of the late 19th and early 20th century history of the Chinese in North America,” said New York University Professor John Kuo Wei Tchen.

“Wong’s quest for equality and his campaigns against vice in early Chinatowns despite numerous assassination attempts are fascinating and largely unknown. said activist/author Helen Zia. “This book is a must-read for everyone interested in American and Chinese history.”