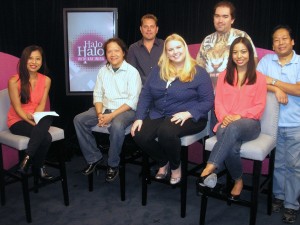 LOS ANGELES (Oct. 26, 2014) — The talk show Halo Halo with Kat Iniba is having No Regrets for their interview with the cast of the new comedy-drama about an end of a marriage and the effects it has towards everyone else moving forward. The series preview interview will air Tuesday, Oct. 28 at 3 p.m (HST), on Hawaii’s KIKU-TV Channel 20 and at 4:30 p.m. (PST) on Los Angeles’ KSCI-TV Channel 18.

Check http://kikutv.com and http://www.la18.tv for the online version of the interview after local air times on Tuesday.

The series premiere will be streamed online Wednesday, Oct. 29, 2014, on YouTube and Vimeo Plus. A new episode will follow every Wednesday for eight weeks thereafter.

Find out more about the show on the Facebook site at https://www.facebook.com/NoRegrets.TheWebSeries. 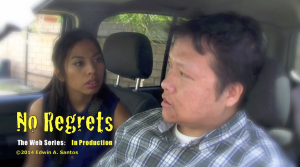 A scene from No Regrets.